The project to establish this most capitalised Slovak financial institution was devised and implemented by Ján Milec, the administrator of a mutual help in Žilina called Vzájomná pomocnica (Mutual Help), and Rudolf Krupec, a manager from Višňové. 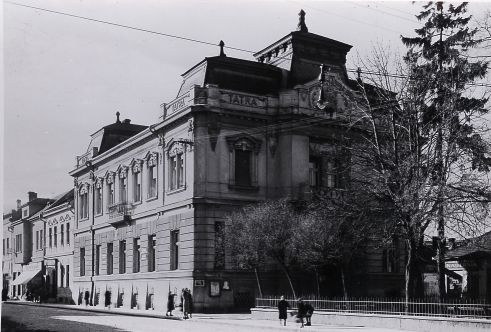 Ján Milec and Rudolf Krupec prepared a call for subscribers and a prospectus and, at a meeting held on 28 July 1884, they announced that 3,500 shares had been subscribed. Following these first steps, a meeting of Tatra banka’s founders was held in Martin on 8 October 1884. Besides Milec and Krupec, there were 190 members who had provided more than a half of the core capital. The bank’s founding general meeting took place on 2 February 1885, but its statutes were only approved on 27 May 1886. The original name of the bank was Tatra, hornouhorská banka (Tatra, Upper Hungarian Bank). In the files concerning the bank’s foundation, the name Hornouhorská banka Tatra (Upper Hungarian Bank Tatra) can also be found. The institution’s management had set their main objective: accepting deposits and providing loans under more favourable conditions than other financial institutions. In line with its original inspiration, the bank took a leading role in building the Slovak financial sector and became a driving force in the development of the Slovak cooperative and mutual sector. In the period leading up to the outbreak of the First World War, the bank helped to finance the establishment of a total of 22 financial institutions.

In seeking to move beyond its local sphere of influence and to advance Slovak capital as far as possible, Tatra banka began building up a network of branches relatively early. Its first branch was established in Dolný Kubín in 1887 by means of a takeover of the local savings bank. Branches in Senica (1888), Veľká Bytča (1889) and in Prešov (1910) followed in subsequent years. The bank was accepted as a supporter of the Slovak national movement. The Declaration of the Slovak Nation (the declaration of the Slovak nation endorsing the creation of a joint state of Czechs and Slovaks) was proclaimed at the bank’s office in Martin on 30 October 1918.

With its wide-spread network of 38 branches and 3 sub-branches, Tatra banka continued to be one of the biggest Slovak financial institutions in the interwar period. Weakened by pre-war turbulence (the collapse of P. V. Rovnianek’s debtor firms in the USA), Tatra banka stayed out of the first wave of the post-war boom; it concentrated on its own recovery and preparation to enter the general consolidation of the Slovak banking sector. The general meeting on 12 July 1919 approved the change in its name to Tatra banka, Martin. During the economic upswing, it actively participated in the banking capital consolidation through the take-over of 25 financial institutions, although it did not manage to completely recover from the losses and complications suffered in the period before the outbreak of the war. In 1920 it merged with one of the oldest Slovak banks – Sporiteľňa in Martin. Its share capital increased from 1.6 million to 75 million Czechoslovak crowns (Kč) after 1918. By the end of 1921 Tatra banka merged with 13 other smaller financial institutions and its capital amounted to 65.5 million Kč. The bank’s branch network was enlarged by 27 offices across Slovakia. 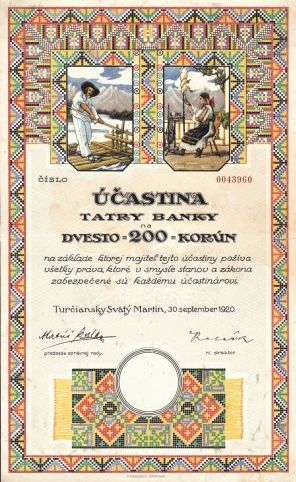 In 1925, the bank’s management underwent internal restructuring and was divided into the headquarters, located in the bank’s historical building in Martin, and the business administration, which moved to a new building in Bratislava (the present Ministry of Culture, at 33 Námestie SNP) in 1926. After the outbreak of the post-war economic crisis, the bank required recovery measures as its losses amounted to huge sums of money again. The reason was that it had taken over a lot of failing financial institutions with bad loans. The bank’s difficult position was aggravated by losses on its investments in joint-stock companies which had rapidly fallen into the post-war crisis, with foreign trade suffering in the subsequent deflation crisis. The bank had to close some of its branches (8 of 44) and a trading company in the wood industry, Drevársky účastinársky spolok. At the same time, it was forced to take over a number of smaller financial institutions for the health of the banking sector.

The first suggestion of a merger of Tatra banka and Slovenská banka was raised by agrarian investors in 1927. Negotiations on the merger were re-opened in 1936, when the target was a merger of Tatra banka with the Banská Bystrica based Národná banka, later known as Stredoslovenská banka, and Slovenská banka. The proposal was rejected by Slovenská banka, however, due to fears that Tatra banka would be unduly favoured in the process. By the end of 1933, Tatra banka had taken over 25 other financial institutions with 32 branches thus bringing the total number of its branches to 75. In the Great Depression (1929 – 1933), Tatra banka suffered fresh losses and needed another bailout, which it succeeded in obtaining albeit subject to compliance with harsh measures. These included a reduction in its share capital by 47%, the transfer of one-fifth of its shares to the state, and ultimately the addition of two members representing the state on the bank’s management board. In 1938, a definitive recovery plan was approved that, based on the interventions of the then prime minister Milan Hodža, attenuated the initial requirements. The share capital was restored to its previous level by a new issue of shares, many of which were purchased by institutions for people’s banking, notably the Zväz roľníckych vzájomných pokladníc (Association of Farmers’ Mutual Treasuries). Tatra banka thus came strongly under the influence of agricultural capital. The Agrarian Party envisaged taking control of Tatra banka to make it the centre of people’s banking and a focal point for bank consolidation. There were plans to make it a platform for the entry of Slovak capital into industry. However, political events overtook this bailout scheme.

After the establishment of the wartime Slovak State in 1939, Tatra banka achieved much prominence, largely because its administrative bodies were controlled by exponents of the Hlinka’s Slovak People’s Party. For their loyalty to the government, the bank received the second largest share in the Slovak financial sector’s consolidation process. Even before its implementation, at the bidding of the Ministry of Finance, Tatra banka had merged with Eskontná a hospodárska banka in Bratislava and had taken over some of the business of the Bratislava branch of Agrárna banka. In July 1941, it began to take over the assets and liabilities of four other banks and a major part of the group belonging to Česko-moravská banka in Slovakia (formerly Legiobanka), including four affiliated institutions with a total of 28 offices. Given this fact, in 1941 it extended its branch network by 11 new branches and 6 sub-branches and in parallel began to liquidate 7 branches in the territory ceded to Hungary. At the same time, it underwent a change in its business orientation, from a bank dominated by agricultural capital to a financial institution funding industry and trade, including foreign trade, which had been, until 1939, the exclusive domain of Czech financial institutions. Since foreign trade represented a new element in the composition of its financial operations, the bank had to expand its agenda by new transactions, thereby increasing the number of employees from the original 470 to 733. A close relationship with the ruling Hlinka’s Slovak People’s Party was reflected in the nomination as managing director of Rudolf Kubiš, who would later become the second governor of the Slovak State’s central bank, Slovenská národná banka.

Archival documents from the bank’s headquarters and branches were initially stored in the corporate archives of Štátna banka československá in Bratislava, Ružomberok, Nitra and Košice, where they were put in order and registry lists were prepared for them. In the mid-1990s these documents were moved to the archives of Národná banka Slovenska at 27 Krajná Street in Bratislava, where they were summarized. The larger, and historically most valuable, part of the archival documents from the headquarters in Martin and branches in Bratislava, Hlohovec, Nitra, and Nové Mesto nad Váhom were transferred from the corporate archives of Štátna banka československá to the Slovak National Archives in Bratislava between 1958 and 1968, where they have remained ever since. Among the oldest documents preserved are a deposit book from 1886 and annual reports and final accounts for the period from 1899. From the post-1945 period, there are minutes of meetings of the national administration and management and supervisory boards.