The 30-year history of this bank was shaped by many mergers and transitions between the spheres of interest of various financial institutions and financial groups.

On 6 November 1910, Magyar telepitő és parcellázó bank, r. t., Budapest established a new bank under the name Hospodárska a parcelačná banka (Economic and Parcelling Bank), joint stock company in Bratislava (in the company register listed as Közgazdasági és parcellázó bank, r.t., or Agrar- und Parzellierungsbank A.G.). The member of parliament Gejza Szüllö became its administrator. Its share capital was set at 500,000 Austro-Hungarian crowns (K), which was reduced to K 350,000 in 1916 due to losses. In January 1917, the bank changed its name to Közgazdasági bank, r.t. (Volkswirtschaftliche Bank A.G.), that is to Hospodárska banka (Economic Bank), joint stock company, Bratislava. From that time, it also belonged to the sphere of interest of Magyar leszámítoló és pénzváltó bank, r.t., Budapest, one of the four most influential banks in Hungary. This also placed it in the Rotschilds’ sphere of interest. The share capital was increased to K 1.5 million. 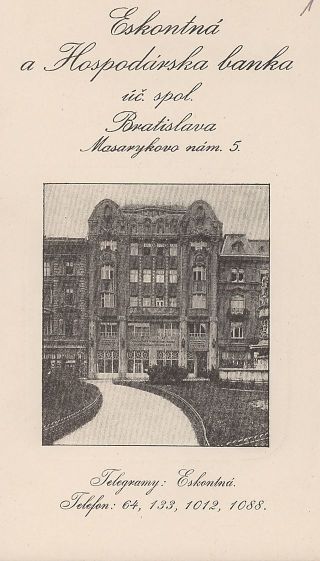 On 30 December 1921, the bank’s general meeting agreed to merge with the branches of Magyar leszámítoló és pénzváltó bank in Bratislava and Košice to form Eskontná a hospodárska banka (ESHB; Discounting and Economic Bank), joint stock company, in the Companies Register as Leszámítoló és közgazdasági bank, r.t. or Eskompte und volkswirtschaftliche Bank, A.G. At the same time, the share of spheres of influence also changed in this bank when Tatra banka gained the majority of its shares. However, Rothschild and Hungarian capital continued to have an influence. The share capital was increased to 10 million Czechoslovak crowns (Kč).

The general director of Tatra banka Vladimír Jesenský was elected as a chairman of the administrative board, while the deputy chairmen became Jozef Bün, the director of Magyar leszámítoló és pénzváltó bank, and Emil Popper, a long-term official of Hospodárska banka. The board included many notable representatives of the Slovak banking sector, such as Ľudovít Vanovič, Fedor Jesenský and Cyril Kresák. Albert Gestetner, a long-term official of Hospodárska banka, became the general director of Eskontná a hospodárska banka. The bank’s headquarters was on today’s Hlavné námestie in Bratislava and it had one branch in Košice.

The articles from 1922 declared its main activities to be the acquisition and sale of foreign currencies, bills and remittances to foreign countries, discounting and rediscounting of bills and various receivables, authorisation of covered and uncovered loans, establishing or participation in establishing economic enterprises. The general director had great powers.

In subsequent years, the financial institution was constantly expanding. In 1924, it took over the bankrupt Veľkotopoľčianska úverná banka, which became a branch of Eskontná a hospodárska banka in Topoľčany. On 28 June 1926, it merged with Drevárska banka, joint stock company in Bratislava. The shares of Drevárska banka were exchanged for the shares of ESHB in the ratio of 4:3. The share capital was again increased to Kč 17.5 million. In 1927, ESHB took over all the shares in the loss-making Bratislavská obchodná a úverná banka. It owned them until 1932.

From 1926 it had also owned shares of Ústredná predajňa dreva (Central Timber Trading Company), joint stock company in Bratislava, which had been founded by Drevárska banka. It became increasingly involved in dubious lending transactions relating to timber. The so-called Herinčov case is a typical example. The ESHB was left with a dubious receivable of Kč 200,000 in the Sub-Carpathian Ruthenia. The bank decided to use the receivable for a badly estimated investment of Kč 3 million (which ended up costing Kč 6 million) for construction of a forest railway from Khust to Herinčov for transporting timber, but the whole investment ended in an investigation and huge losses. After 1933, Ústredná predajňa dreva did not report any activity. Vladimír Jesenský resigned from the position of chairman of the administrative board, while the annual report of 1931 did not say anything about his successor. Only in 1932 Emil Popper, a businessman, gained the position, followed by the government adviser Igor Dula one year later, who led the administrative board up until 1938. The next year he was replaced by Ján Ďurčanský, a public notary. However, Albert Gestetner remained the chief director.

In 1933 the bank felt the full effects of the economic crisis as well as consequences of bad loans, which led to a reduction of its share capital to Kč 8.4 million. Bad receivables had already been written off earlier. In 1922, the bank’s management approved a proposal for writing off Kč 1.2 million. A year later, it was Kč 3.9 million and in 1925 it soared to almost Kč 11 million. After 1932, the ESHB did not pay any more dividends and the annual profit, rarely amounting to more than Kč 30,000, was carried over from one year to another.

On 30 July 1940, on the basis of the general meeting resolution and an order from the Ministry of Finance of the Slovak Republic of 15 May 1940 it merged with Tatra banka. Its shares were exchanged for shares of Tatra banka in the ratio of 3:1. The premises of the ESHB became a branch of Tatra banka. Košice had been occupied by Hungarian forces since the 1938 Vienna Arbitration and the branch there continued to exist until 1942.

The administrative documents of the ESHB were deposited without any order in the archives of Štátna banka československá at Marianka in 1956. In 1975 – 1977, the records were moved to a new utility building of the archives at 27 Krajná Street in Bratislava and later, in 2003, they were transferred to the Archives of Národná banka Slovenska at 8 Cukrová Street in Bratislava.

Part of the fonds was processed in the archives of Štátna banka československá in Bratislava in 1965 and the inventory to this fonds was revised in the Archive of Národná banka Slovenska in 2015. The documents of the fonds are written in German and Slovak. The most significant documents include the minutes of administrative bodies, review reports, annual reports and final accounts. Many documents of the loans department were also preserved.