This was a Czech bank that significantly affected the banking situation in Slovakia in the period of the First Czechoslovak Republic. The founding general meeting was held on 29 June 1921 and its share capital amounted to 70 million Czechoslovak crowns (Kč). Its business activity started already the year before. The only Slovak who worked in the bank’s top management was Pavel Varsik. At first, he was in charge of the Bratislava branch and in 1924 he became a member of management of the Prague headquarters for Slovak and Sub-Carpathian Ruthenian matters. The most important enterprises of the bank in Slovakia were Legiolom Bratislava, Komenský Bratislava, a publishing and literary company, Slovenka, a factory for knitted and woven goods in Martin, Tatranská elektrická vicinálna dráha (Tatra vicinal electric railways) at Starý Smokovec and Československá plavebná akciová spoločnosť dunajská (shipping company), Bratislava. In the mid-1920s, the bank began to take on larger exposures in Slovakia, part of which was aimed at making former Hungarian banks more “Czechoslovak”. By takeover and liquidation of financial institutions, it created a network of branches and affiliates. Only a few documents were preserved from the activities of the Slovak branches. 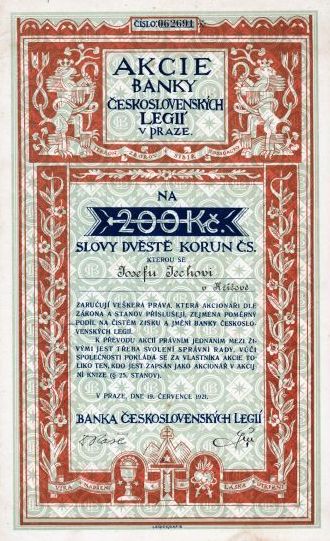 The oldest and most important Slovak branch was the Bratislava branch, officially established on 6 September 1921. The members of the first board included Jozef Gregor Tajovský, Ignác Gessay and Pavel Varsik. In the spring of 1921, the bank started to carry out financial operations related to the activities of the industrial department. In 1930, the branch was already divided into deposit, treasury, foreign exchange, discount, stock exchange and shipping departments. This branch had a supervisory role in relation to other Slovak branches.

In May 1921, a sub-branch in Piešťany was established and from 6 August 1925 it operated as a branch. Its main activities included contacts with foreign clientele and supporting legionnaires and local business and industrial circles.

A new sub-branch was established in Nové Mesto nad Váhom in 1922, mainly due to financing of the company Americko-slovenská drevospracujúca spoločnosť (American-Slovak wood processing company). It was transformed into a branch in 1924 and it financed the construction of railway track from Nové Mesto nad Váhom to Veselí nad Moravou, Americko-slovenské krajčírske družstvo (American-Slovak tailor cooperative) and the construction company Krulich.

After the nostrification of Tatranská elektrická vicinálna dráha in 1922, the bank soon acquired a majority in it, and decided to establish a sub-branch at Poprad, which became a full branch in 1925. At first, its primary task was the financing of the railways and the construction of Hotel Šport at Hrebienok and the cable car to Lomnický Peak. At the same time, it operated seasonal exchange offices in Poprad, Sliač, Starý Smokovec, Štrbské pleso and Tatranská Lomnica.

In 1925, the bank affiliated with Košická úverná banka and a year later it established its own branch. In view of the Košice bank’s previously wide clientele of small farmers and tradesmen, it was expected to have good growth prospects. However, due to unfavourable economic conditions and strong competition, it did not report the desired results. The Ministry of Finance issued an authorisation to establish a branch in Zvolen in 1924, but apparently it did not start operating until 1926.

In October 1925, an association agreement was signed between Michalovská eskontná banka and Banka československých légií (Czechoslovak Legions Bank). After the merger of Zemplínska ľudová banka with Michalská eskontná banka, Zemplínska eskontná a ľudová banka, Michalovce, was established. In 1933, it was transformed into a branch of Banka československých légií.

Banka československých légií also bought the majority of the share capital of Zlatomoravecká agrárna banka in Zlaté Moravce, which in 1929 was in a difficult situation and at risk of bankruptcy due to poor management and embezzlement. As until then it was a bank with Hungarian administration, its takeover in 1933 was considered significant not only for commerce and industry but also for the question of nationality.

In 1932, a branch of Banka československých légií was established in Žilina, where Žilinská obchodná banka had operated since 1931 as an affiliated institute. At the initiative of the Ministry of Finance, an agreement on the settlement and liquidation of this bank was signed with Úverná banka in Žilina, upon which depended ministerial consent for the establishment of a branch in Žilina. 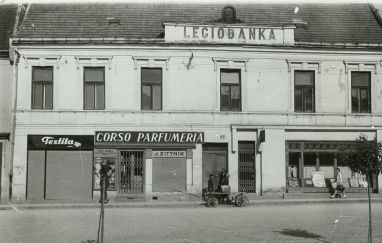 As a result of political events, it was renamed Legiobank in May 1939 and its branch in Bratislava became an organisational unit of the main office in Prague authorised to conduct all banking transactions. Another change in the name of the bank occurred in April 1940, when the bank was renamed Českomoravská banka, a.s. with headquarters in Prague. In November 1943, the Bratislava branch was dissolved at the order of the Ministry of Finance, and eventually the other branches were dissolved as well. Although Legiobanka was renewed after 1945, it ceased to exist after a merger with Živnostenská banka at the end of 1947. In 1948, all assets and liabilities of the dissolved branches passed to Slovenská všeobecná úverná banka in Bratislava. It was deleted from the Companies Register on 1 December 1953.

Archival documents from the branch of Banka československých légií in Bratislava, which constitute the largest and most significant part of the fonds, as well as documents of the branches in Komárno, Nové Mesto nad Váhom, Zlaté Moravce and part of documents of the branches in Poprad, Zvolen and Žilina were deposited in the archives of Štátna banka československá in Bratislava. In 1965 they were arranged and processed to construct a registry list. In 1974 – 1976 they were moved to the archives at 27 Krajná Street in Bratislava.

Archival documents on branch operations in Ružomberok, Zvolen and Žilina were stored in the archives of Štátna banka československá in Ružomberok and in 1968 they were arranged and processed to construct a registry list. In 1993, these documents were transferred to the Archives of Národná banka Slovenska at 27 Krajná Street in Bratislava.

Archival documents on branch operations in Košice, Michalovce and Poprad were stored in the archives of Štátna banka československá in Košice and in 1964 they were arranged and processed to construct a registry list. In 1996, they were transferred to the Archives of Národná banka Slovenska at 27 Krajná Street in Bratislava.

In 2003, the entire fonds was transferred to the Archives of Národná banka Slovenska at 8 Cukrová Street in Bratislava. All three finding aids were reviewed here and merged into one inventory, to which an introduction was added.

Archival documents in the scope of 8 linear metres processed in this inventory form only a small part of the original registry as many documents were lost during the Second World War, when the administrative documents of Českomoravská banka and its legal predecessors were deposited in Cífer. A basic registry list was prepared in 2013, to another part of the documents from the activities of Banka československých légií in Slovakia in the scope of 9 linear metres relating to its liquidation in the period 1941 – 1953. In 2018, the entire fonds was merged into one inventory.

Despite the fact that the archive fonds of Banka československých légií is incomplete and partly unprocessed, it does provide a relatively rich source for scholars of economic and social history in Slovakia in the first half of the 20th century.