Živnostenská banka (Trade Bank), Prague, was a prominent Czech bank established in the 19th century. Even at that time it was in contact with the Slovak economy, as it funded numerous enterprises in Slovakia either directly from Prague or through its branches in Vienna and Brno. The bank cooperated particularly closely with Úverná banka in Ružomberok, which was renamed to Slovenská banka in 1919. Živnostenská banka’s first branch in Slovakia was established in Bratislava, where it started operating on 19 March 1919. 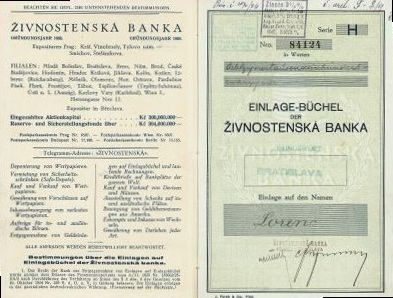 Živnostenská banka controlled several industrial enterprises in Slovakia, for example, the paper and cellulose factories in Ružomberok and Žilina, Karol Stummer’s sugar factory in Trnava, Mautner’s textile factory in Ružomberok, a spirit refinery in Prešov, the Czechoslovak Danube shipping joint-stock company in Bratislava, and Považský liehovar (distillery) in Leopoldov. It gradually opened further branches in Košice and Žilina. The Bratislava branch had 120 employees. In 1948, the bank’s business activities were taken over by Slovenská Tatra banka.

The archival fonds includes the bank’s official correspondence with its business partners, annual reports and specimen signatures. The preserved documentation concerning the activities of the Bratislava branch consists mainly of credit and accounting documents. Only a very limited part of the documentary records (specimen signatures from the headquarters and branches) concerning the activities of the Žilina branch, established in 1938, have been preserved. An inventory for a part of the fonds was created in 2007. The documents were deposited in the archives of Štátna banka československá located at 27 Krajná Street in Bratislava, and in 2003 they were moved to the Archives of Národná banka Slovenska at 8 Cukrová Street in Bratislava.