The library was established in the times of Štátna banka československá (State Bank of Czechoslovakia), which was a direct legal predecessor of Národná banka Slovenska (NBS). It is made up of the collections of books belonging to various banks operating in Slovakia before 1950 and is constantly being expanded. Currently, the library maintains a collection of almost 3,700 books. Some of the books are unique specimens with great historical and informational value. The collection includes books from various areas – history, law, finance, banking and insurance, economy and economics, and archiving.

Periodicals, most of which are closed and are not published any more, form a special group. Many periodicals have survived only on a piecemeal basis. Among the most precious is the oldest Slovak journal on banking and finance, called Slovenský peňažník, issued in the period 1909 – 1922 with a break during the First World War. Its first editor-in-chief was Viliam Pauliny. Another very valuable item is a copy of Slovenský kompas from 1911. There is also a remarkable collection of Hungarian laws Corpus Iuris Hungarici and the economic and financial journal Compass (since 1881). The mosaic of valuable items in the collection of books also includes historical lexicons of towns and villages, calendars of dissolved banks, the business magazine Mercur  and many others.

The library maintains also the first comprehensive history of the Slovak banking and financial sector (up to 1950) from the authors Ján Valach and Štefan Horváth, as well as the follow-up publication, The History of Central Banking in Slovakia, which was produced in 2013 by a group of employees of the NBS Archives Section to mark the Slovak central bank’s 20th anniversary.

The NBS Archives library is a specialist library which collects, stores and offers for use specialist publications mainly concerning finance, banking, history and law. It provides services to the employees of Národná banka Slovenska and the public.

The books and periodicals are available to the public for study only in the reading room during the opening hours of the NBS Archives. 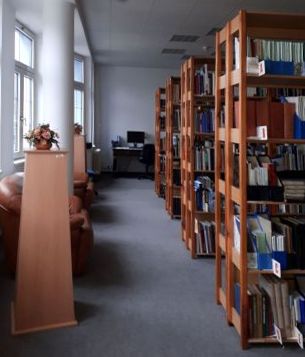