Turčianskosvätomartinská sporiteľňa (Savings Bank of Turčiansky Svätý Martin), joint stock company, is considered to be the oldest Slovak bank. It was the first financial institution with Slovak management and Slovak share capital. The founding general meeting was held on 7 April 1868. The bank’s top executives included significant figures in Slovak society, for example, Jozef Justh, Viliam Pauliny-Tóth, Pavel Mudroň and Matúš Dula. The bank was primarily engaged in deposit-taking and lending, but it also played an important role in the establishment of other Slovak financial institutions and in supporting Slovak business plans. From 1913 it operated under the name Sporiteľňa, účastinársky spolok (Savings Bank, joint stock company), Turčiansky Svätý Martin, and it ceased to exist in 1920, when it was taken over by Tatra banka. 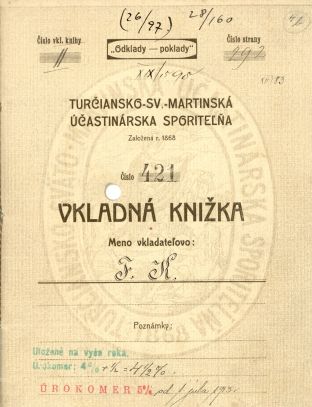 Its establishment was a follow-up to a letter from the bank's preparatory committee on behalf of the town, at that time called Turčiansky Svätý Martin, addressed to the High Royal Deputy Council in Buda from 1864, which asked for a permission to establish a savings bank. The approval from Buda was delayed and so a meeting aimed at collecting shares took place in the Martin casino on 8 January 1868. The bank's preparatory committee managed to obtain, despite the impecunious Slovak environment, 438 underwriters instead of the statutory 300 shares at 100 guldens each. The bank’s founding general meeting took place on 7 April 1868 under the leadership of Viliam Pauliny-Tóth and the Executive Committee of 24 members first met sixteen days later to elect officials and set 1 June 1868 as the opening date. Samuel Šiška became the bank’s secretary and also accountant, Ľudovít Tomka was the cashier, and Ján Kohút was the bank’s legal representative.

Sporiteľňa started operating with a share capital of 15 thousand guldens and at the end of 1868 it reported a net profit of 459 guldens, while receiving deposits in the amount of 24,442 guldens. It also had to cope with difficulties, when for example, it had to suspend its operations from 12 July to 21 August 1868 as its articles of association had still not been officially certified. The Hungarian Ministry of Economy, Industry and Commerce issued its definitive approval on 17 August 1868. The volume of operations increased with time and deposits amounted to 4 million Austro-Hungarian crowns (K) and loans amounted to K 3.8 million. The bank paid its first dividend in 1872.

Thanks to Sporiteľňa, the importance of the town of Martin increased in terms of both finance and business. The bank opened its first branch in Liptovský Mikuláš in 1884 and another one in Vrútky in February 1909. Ľudová banka in Štubnianske (today Turčianske) Teplice became its branch and the former Ľudová banka in Sučany became its sub-branch in 1912. The bank also played an important role in the establishment of other Slovak banks. In 1879 it participated in the establishment of Ružomberský účastinársky úverkový spolok  and, several years later, also of Tatra banka, Ľudová banka in Nové Mesto nad Váhom and Zvolenská ľudová banka; it also helped in the resolution of the crisis in Myjavská banka, and one of its most important bailout actions was the recovery of Tatra banka after the collapse of Rovnianek’s bank in the USA in 1911. Sporiteľňa in Martin also supported Slovak industrial projects. First it built a chair factory in Martin which continued from 1895, also with the help from Tatra banka, as Dielňa na náradie (a tool workshop). Turčiansky pivovar (a brewery) and Kníhtlačiarsko-účastinársky spolok (a book-printing association) were established in Martin in 1893. Sporiteľňa was also involved in the establishment of Továreň na celulózu (Cellulose Factory) in Martin in 1902, Uhorská papiereň (Hungarian Paper Works) in Ružomberok in 1906, and Továreň na vápno-pieskové a cementové výrobky (the works producing lime sand and cement products) in Kraľovany in 1912.

It played an active role in charity and cultural and social life (supporting schools, studies of students at Czech schools, supporting a chorus, the Museum Slovak Society, Slovak printed media and literature). The first administrator of Sporiteľňa was Jozef Justh. He was followed by Viliam Pauliny-Tóth (1869 – 1877), Ambróz Pivko (1878 – 1887), Pavel Mudroň (1888 – 1914) and Matúš Dula (1915 – 1920). Each of these administrators was actively involved in social and political life; Matúš Dula, as the bank's administrator, was also chairman of the Slovak National Party and the Slovak National Council, and he also chaired the Memorandum Assembly in Martin on 30 October 1918. Sporiteľňa in Martin ceased its operations based on the act on savings banks of April 1920 under which only financial institutions established by local governments or towns could use the name ‘savings bank’. Other institutions had to change their names within one year. On 24 August 1920, an extraordinary general meeting of Sporiteľňa decided to merge with Tatra banka and a week later, at an extraordinary general meeting of Tatra banka, Sporiteľňa ceased to exist after 52 years of operations.

The archival fonds of Sporiteľňa consists of documents from the years 1868 – 1928. The oldest preserved document comes from the period of the financial institution’s establishment. It is a letter from Viliam Pauliny-Tóth concerning orphans’ deposits addressed to the administration of Sporiteľňa. The fonds also includes a part of the minutes of the bank management meetings, general meetings and reports on the activities from the years 1873 – 1919, purchase contracts and plans of the bank’s building. The documents were deposited in the archives of Štátna banka československá in Ružomberok, where their inventory was prepared in 1968. Since 2003 they have been in the Archives of Národná banka Slovenska at 8 Cukrová Street in Bratislava.