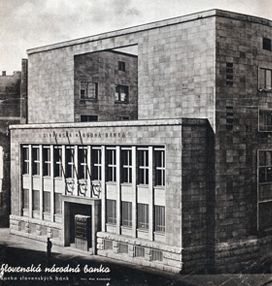 Slovenská národná banka (SNB; Slovak National Bank) was established by Government Regulation No 44 of 4 April 1939 as a new legal entity and took over all functions of Národná banka Česko-Slovenská (NBCS). Already on 16 March 1939, Decree No 20 of the Ministry of Finance had entrusted the Bratislava branch of the NBCS with the function of the Main Institute. On the same day, the entire trade network of Národná banka Česko-Slovenská in the territory of the Slovak State was taken over by the Bratislava branch, and subsequently the other branches were closed down (Regulation No 52 of the Ministry of Finance of 6 April 1939) and taken over by SNB.

Slovenská národná banka was established as a joint stock company with a share capital of 100 million Slovak crowns (Ks), of which the Slovak State owned 60% and Deutsche Golddiskontbank the remaining 40%. In 1944, the Slovak State became the sole (100%) owner of the bank. The bank exercised the state’s rights as an issuing bank. Its main tasks were to maintain currency stability, regulate the entire payment system, provide credit to the national economy and perform the exclusive right to issue the Slovak State’s banknotes. SNB was also the sole administrator of Fond hospodárskej samostatnosti (Economic Independence Fund). At the head of the bank were the governor and the deputy governor, both with a tenure of six years. Imrich Karvaš was appointed the first governor of SNB, replaced in October 1944 by Rudolf Kubiš. The first deputy governor was Jozef Fundárek, followed by Ján Balko, whom the government appointed in March 1945. The governor was the key decision-maker in the bank and had extensive powers – he participated in the meetings of the government, he called and presided over the General Meeting, meetings of the Bank Board and Management Board, he appointed the director of the Audit Committee and all other employees, and also specified their positions and duties.

The bank’s administrative bodies comprised the General Meeting, Audit Committee, Bank Board, Management Board and, from April 1945, the Temporary Administration of Slovenská národná banka. The headquarters of the bank included six departments and in 1944 this number was reduced to five: (Presidium), the Administrative Department, Credit Department, Foreign Exchange Department, Audit Department, and Economic Growth Research Department. Initially, SNB had 5 offices – the Main Institute in Bratislava and branches in Banská Bystrica, Nitra, Žilina, and Ružomberok. After the opening of the Prešov branch in late April 1939, Slovenská národná banka had six offices and 17 branches, bringing the total number of offices falling under its direct or indirect competence to 23. 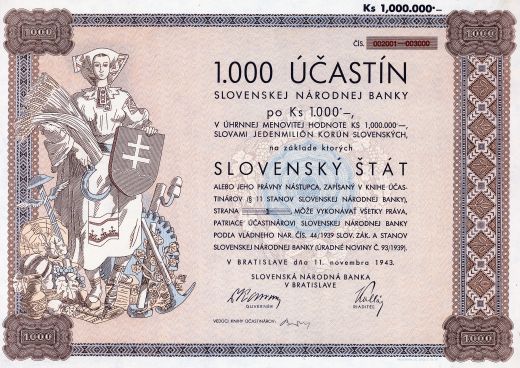 The operation of the branches was severely disrupted with the outbreak of the Slovak National Uprising. Already in the first days of the uprising the branches were fully isolated from the headquarters, leaving it with absolutely no means of control. Albeit only for a short time, the newly-constituted Slovak National Council, which was governing the everyday life in the territory under its control, had a significant impact on the operation of the branches and, indirectly, of the headquarters as well.

Under Regulation No 17 of the Slovak National Council of 14 September 1944, the Banská Bystrica branch of Slovenská národná banka was temporarily charged with the execution of all powers and duties of Slovenská národná banka; the regulation also subordinated all offices and branches to the branch in Banská Bystrica, effectively creating two independently working management centres. The co-existence of two central banks in one state ended on the suppression of the uprising and the Slovak State authorities regained control over the territory. Developments in the war led to the order for SNB branches to evacuate to Bratislava at the beginning of 1945 to protect its assets.

The liberation of Slovakia started the final phase of SNB’s career as an issuing bank, characterised by the preparations for its complete reorganisation. Through its Decree of 16 April 1945 and Decree No 437/45 - VI/18 of 18 June 1945, the Slovak National Council’s Executive Authority for Finance appointed the Temporary Administration of Slovenská národná banka; its main task was to fully merge Národná banka pre Čechy a Moravu and Slovenská národná banka into one issuing bank based in Prague. One of the last major operations performed by SNB was the affixing of stamps to Slovak banknotes, which took place between July and September 1945. Its main goals were to withdraw the pengő banknotes from circulation in Southern Slovakia, to prevent the import of illegally obtained banknotes from abroad and, most importantly, to introduce a single Czechoslovak currency – the Czechoslovak crown (Kčs). The new currency was exchanged from 29 October until 4 November 1945 at the rate of 1 Ks to 1 Kčs. After partial consolidation of situation in the re-integrated territory, two new branches of the central bank were established in Košice and Nové Zámky. In August 1945, the Temporary Administration of Národná banka Československá (NBCS) in Prague appointed Ján Oliva and Ján Michalík, members of the SNB Temporary Administration, directors of Slovenská národná banka and gave them some competences of the former governor and deputy governor.

Until 1951, little or no attention was paid to the documentary records of banks’ operations, the only exception being Slovenská národná banka as the former issuing institution. The registries of the financial institutions were scattered across Slovakia, although most of them were located in Bratislava, at Biela, Laurinská and Židovská Streets. The situation changed in 1951, when the representative (Karol Markovič) of the regional manager of Štátna banka československá (the successor bank of the NBCS) ordered the drafting of a blueprint for establishing and operating the Historical and Documentary Department, later known as the Historical Archives. The management called on all branches of Štátna banka československá to collect and register all documents relating to Slovak financial institutions. At the same time, it prohibited the shredding of any of these documents, with the exception of copies.

Due to space limitations, the archives were sent to a former monastery at Marianka despite its unsuitability for such purposes. Without any order whatsoever, huge numbers of documents were stored in folders and packages on shelves in damp rooms. The first test-processing of bank registry records for archival purposes took place in the late 1950s and early 1960s. Between 1975 and 1977, the documents were moved from the monastery at Marianka to the new archives of Štátna banka československá at 27 Krajná Street in Bratislava. In 2003, they were transported to the building of the Archives of Národná banka Slovenska at 8 Cukrová Street in Bratislava. The vast majority of registry records had been kept at Marianka in the packaging they arrived in, with no consideration given to the documents’ originators; in the case of Slovenská národná banka this led to its registry records getting jumbled together with those of Národná banka Československá and Štátna banka československá.

The archive funds of SNB include written records that document the bank’s operations from its establishment until its merger with Národná banka Československá. The documents from the first three years of the institute’s existence form a rather comprehensive body. The most documented is the operation of the Administrative Department, despite only fragments surviving from the agenda of some of its sections (e.g. the central accounting office, central register office and the Main Institute). In terms of scope and content, the documents from branches form the weakest part of the documentary record. The documents of the Banská Bystrica branch (1.5 shelf metres) comprise mainly copies, and only cash books were preserved from the Nitra branch (1 shelf metre). The documents from the Ružomberok branch were damaged beyond repair by flooding and discarded based on the shredding protocol of 26 November 1992. No documents were preserved from the Prešov and Žilina branches. The most significant documents are the General Meeting minutes, minutes of the Bank Board and Temporary Administration meetings, and the annual accounts.

The order of documents follows the organisational structure of 1940, which remained effective until 1944 with minor modifications. The Administrative, Credit, and Foreign Exchange Departments form standalone units (they had their own agendas) with subordinate sections. Records that document the activities of the Pension Fund, Employee Hospital and Assistance Fund, and the employees’ Procurement and Construction Cooperatives are stored as individual fond sections.

Slovenská národná banka was one of Slovakia’s most important economic institutions. Considering the impact of its decisions on the financial market and the broader economy, it played a significant role in securing the economic stability of the country. Among the items of interest are documents describing the production and introduction of the Slovak currency, the circulation and registering of legal tender, and the construction of a new headquarters and a new building of the Prešov branch. The Credit Department’s documents clarify the lending process and describe the overall status of the Slovak economy during the war. A number of significant documents from the Foreign Exchange Department concern the bank’s trade policy vis-à-vis the external environment, especially with the German Reich. An overall picture of the bank’s performance is provided by Audit Department minutes, balance sheets, and annual asset and liability balances recorded in the accounting books. The fund’s inventory was prepared in 2014.