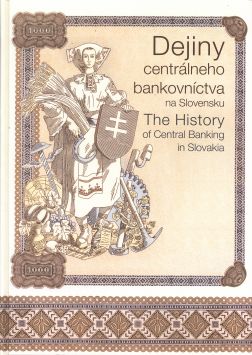 The origins of the NBS Archives are directly connected with the establishment of Štátna banka československá (SBCS, the State Bank of Czechoslovakia) in 1950, which shortly afterwards became the legal successor of most of the dissolved financial institutions in Slovakia. On 31 August 1951, the Historical Records Department was set up at SBCS’s Bratislava-based Regional Institute for Slovakia; it was entrusted with the task of collecting, cataloguing and storing documents of former financial institutions in Slovakia and providing methodological guidance for their management.

Documents of former financial institutions resident in Bratislava and the former Western Slovakia Region were gradually brought together at the premises of a former monastery at Marianka near Bratislava. For the other Slovak territories, regional SBCS corporate archives were established, first in Košice and Turčianske Teplice and later in Ružomberok and Nitra. The Marianka monastery was, for various reasons, unsuitable for the permanent storage of documents, and so in the late 1970s the SBCS management started construction of a new purpose-built archive building in the Trnávka district of Bratislava, on Krajná Street. After Národná banka Slovenska (NBS) was established in 1993, the archival fonds from the former regional archives of central and eastern Slovakia were transferred to that building. Today, NBS has two archive buildings containing in total almost 5,000 shelf metres of archival documents. Most of the SBCS and NBS archival fonds are stored at the NBS headquarters, at 1 Imricha Karvaša Street, where the NBS Registry is also located. The archival fonds of former financial institutions from all over Slovakia are stored at the NBS Archives building at 8 Cukrová Street.

The Archives Section provides both professional researchers and the general public with information and consultancy services related to the documents in the NBS Archives. It cooperates with various authorities and institutions in Slovakia and abroad in administrative matters related to restitution claims, the settlement of property rights, and information on ancestors’ property.

The results of archival processing are published in various periodicals and books. Between 1997 and 2003 a series of articles on leading figures in the history of the Slovak financial sector was published in the NBS banking journal Biatec, and this was followed by a series on financial institutions in Slovakia. In 2000 the NBS Archives staff produced a book entitled Documents from the NBS Archives. In 2002 the NBS Archives Section organised a conference entitled ’People, Money and Banks’, which was attended by leading Czech and Slovak experts in the fields of archaeology, numismatics, economic history and linguistics. Papers from the conference were published in an eponymous anthology.

In 2011 the NBS Archives staff participated in the publication of an impressive bilingual book entitled Platidlá na Slovensku / Money in Slovakia, which mapped the evolution of money in Slovak territory from the earliest times to the adoption of the euro in 2009.

In 2013 current and former staff of the NBS Archives were the main authors of a bilingual monograph entitled Dejiny centrálneho bankovníctva na Slovensku / The History of Central Banking in Slovakia, published to mark the 20th anniversary of Národná banka Slovenska. This book, the first of its kind in Slovakia, provides a comprehensive overview of the history and development of banking and finance in the territory of what is now Slovakia. It is based on an abundance of materials from Slovak and foreign archives and in particular from the NBS Archives. In the same year, the NBS Archives prepared an international academic conference with the same name as the monograph. Besides Slovak economists and historians, the speakers at the conference included experts from the Czech Republic, Austria, Hungary and Croatia. The conference presentations were the basis for a multi-authored 2014 monograph entitled Central Banking in Central Europe and produced in cooperation with the Institute of History of the Slovak Academy.

In October 2017 a second, amended edition of Platidlá na Slovensku / Money in Slovakia was published to mark the 25th anniversary of Národná banka Slovenska. Prepared by the NBS Archives Section, the new edition included additional information on the development of the euro currency and on commemorative and collector coins from 2009 to the present.

The NBS Archives Section is a long-standing member of the European Association for Banking and Financial History (EABH), based in Frankfurt am Main, Germany. In cooperation with the EABH, an international conference entitled ’People’s Banking and Financial System’ took place at the NBS headquarters in May 2003. The NBS Archives staff regularly represent the bank at EABH workshops and annual conferences dealing with current issues of archival document selection, management and processing. They also take part in meetings about the management of registry records and archival documents organised by the European Central Bank (ECB) – Information Management Network for the working group of European Union central banks’ registries and archives. The NBS Archives Section also cooperates with other institutional archivists in Slovakia, including a group representing specialist public archives and members of the Society of Slovak Archivists. Regarding cooperation with foreign institutions other than the ECB and EABH, the NBS Archives Section works closely with the Archives of Česká národní banka (Czech National Bank) and the Bankhistorisches Archiv of Oesterreichische Nationalbank (Austrian National Bank).