Towards the end of 1938, after Slovakia was declared autonomous, the idea arose to establish a bank dealing with long-term debt issuance. The then Slovak government came up with an idea to make a new debt-issuing bank from the branches of Zemská banka and Hypotečná banka česká in Bratislava. Its working name was Krajská banka pre Slovensko (Regional Bank for Slovakia). The authorised representative of the government responsible for the matter was Anton Mederly, General Manager of Ľudová banka in Ružomberok, who was charged with preparatory works for the establishment of the new institution. After intense negotiations an agreement was reached between representatives of Zemská banka in Prague, Hypotečná banka česká in Prague and the newly established Slovenská hypotečná a komunálna banka (Slovak mortgage and municipal bank) in Bratislava.

The bank was managed by a directorate chaired by general director. The first general director was Anton Mederly. The directorate also included three directors – Anton Haspel, Jozef Štetina and Mikuláš Franek, and seven other executive members. After Bratislava was liberated from the Nazis, the bank was put under temporary administration based on Decree No 701/45 of the Executive Authority for Finance of 14 April 1945. The bank’s temporary administrators were Elo Šándor, Matej Murtin and Juraj Jurkovič. When the temporary administration was lifted, a new, two-member, directorate was nominated, comprising Elo Šándor and Matej Murtin. Both managers already had experience in the field of mortgage banking, Šándor in Hypotečná banka česká and Murtin in Zemská banka. On 31 March 1948 the bank’s articles were changed, re-introducing the position of general director, to which Elo Šándor was appointed. 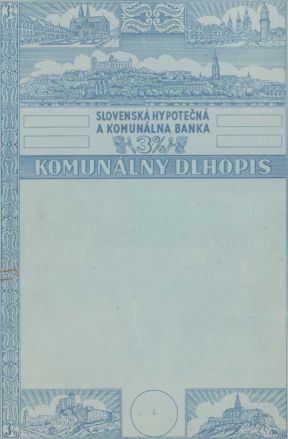 The political changes after the events of February 1948 resulted in the introduction of Act No 183 on Investičná banka, which was approved on 20 July 1948. The Act ordered that all rights and obligations of Slovenská hypotečná a komunálna banka and several other financial institutions would be transferred via universal succession without liquidation to the newly established Investičná banka, which started its operation on 1 October 1948. The new bank was centrally managed from Prague, while in Slovakia it was represented only by a regional office and several branches.

In 1958, the organisational units of Investičná banka in Slovakia and most of their activities were incorporated into Štátna banka československá. The operation of Investičná banka was limited to the completion of transactions and liquidation of claims of the financial institutions from which it had been established. In 1957, mortgage loans granted by these institutions were transferred to the Central Liquidator of Financial Institutions and Enterprises (whose legal successor became the Administration of Property and Foreign Exchange Affairs in 1964). Documentation on liquidated cases returned to the Office of Investičná banka in Bratislava, which was established in 1962 and processed certain documentation for the Central Liquidator. The Office was closed in 1969 and its activities were transferred to the Regional Institute for Slovakia of Štátna banka československá. The documentation was stored in the Bratislava Branch of Štátna banka československá, which was responsible for archiving services. Between 1958 and 1963, documents of Investičná banka were stored in Bratislava at 12 Leningradská Street (today Laurinská Street) and later, in 1963, transferred to 1 Nedbalova Street. Part of the documents were discarded and destroyed in the 1950s.

Eventually, the documents were deposited in a former monastery at Marianka, which served as archives for the Regional Institute for Slovakia of Štátna banka československá. From 1975 to 1977 they were moved to a new building of the Archives located at 27 Krajná Street in Bratislava and in 2003 to the premises of Národná banka Slovenska at 8 Cukrová Street.

The documents mainly include records and books of the bank’s headquarters and credit and deposit documentation. In 2014, an inventory of the first part of the fond was made, which reflects the original organisational structure of the bank. The archive fonds can be used for the research of mortgage banking and lending as well as investment history in Slovakia from the beginning of the Second World War until 1948.