Investičná banka (IB; Investment Bank,) was established based on Act No 183 of 20 July 1948. The Act legalised bank concentration in Czechoslovakia and allowed the existence of three types of banks – national enterprises, Poštová sporiteľňa (Postal Savings Bank) and Investičná banka – and significantly affected the structure of people’s banking. The Ministry of Finance acquired supervisory, dissolving, normative, controlling and revising rights in relation to these financial institutions. The banks were ordered to apply the business principles in their business activities and to deliver a net profit to the state. 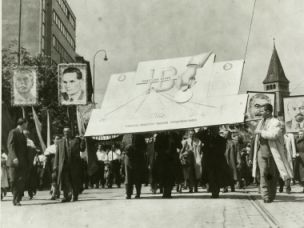 The need to establish Investičná banka resulted mainly from the separate funding of operations and investments. The bank was a state-wide national enterprise with its headquarters in Prague, a branch in Brno and a regional institute for Slovakia in Bratislava. It applied an asymmetrical management structure. The bank’s main competences and duties were to fund and control investments, provide and take over long term loans whether based on the issuing of securities or otherwise, including loans for purposes other than investment. It also provided services for Fond znárodneného hospodárstva (Nationalised Economy Fund) until it was dissolved in 1950.

The bank was a specialised financial institution responsible for investment activities and included several merged banks – Zemská banka pre Čechy - Ústredná banka sporiteľní v Čechách a na Morave, Zemská banka pre Moravu a Sliezsko, Slovenská hypotečná a komunálna banka and Československý reeskontný a lombardný ústav (Czechoslovak Rediscount and Lombard Institute). Investičná banka assumed the rights and obligations of these financial institutions by universal succession without liquidation. Basic deposits of the state in the dissolved financial institutions were transferred to its equity. The IB’s Regional Institute for Slovakia was established by universal succession of Slovenská hypotečná a komunálna banka, whose existence its chief executive directors Elo Šandor and Matej Murtin had unsuccessfully tried to preserve. On 1 July 1948 Matej Murtin was appointed the IB’s deputy chief executive director in Prague where he remained until 1956. Elo Šandor became the IB’s regional executive director for Slovakia. He died at work in 1952. The second and at the same time the last executive director of the Regional Institute was František Cibula, who remained in the position until the Institute was dissolved in 1958.

The main idea behind the establishment of the bank was that centralising the provision of all long-term loans would enable not only control of investment loans, but also control of investments that were funded by a combination of subsidies from Fond znárodneného hospodárstva and from enterprises’ own resources of enterprises, i.e., self-financing.

In the period 1950 – 1952 there was further centralisation with all powers being concentrated in the hands of the principal executive director and the country director, who was subordinate to him. Later in 1952, a collective body called the bank administration was established, which had a principal director, his deputies, a country director, a chief inspector and a chief accountant.

From 1952, the bank had branches in all regional capitals. These branches were headed by directors who reported directly to the country director for Slovakia. Some branches also existed on the lower, district, level and reported to the branch in the regional capital. The branch for the Bratislava region started operating on 1 March 1952. The bank’s lowest components were agents. These were, in fact, employees of a branch who performed all activities related to loan inspection. The bank’s activities were defined in the statutes.

At the end of 1952, the bank was transformed into a state financial institute and in accordance with the new statutes it was supposed to provide funds for all types of investments of all organisations and facilities. These statutes were limited in 1957 to providing funds for investments and short-time loans to building organisations and to agricultural and other types of cooperatives. Government Decree No 389 of 25 April 1958 approved a draft Act No 43/1958 issued on 3 July 1958 which detached the investment loan business and assigned it to Štátna banka československá (SBCS). The regional and district branches of Investičná banka were dissolved as well as the agents’ positions. By the end of 1958, all duties and staff were taken over by the Regional Institute of the SBCS in Bratislava. Additionally, part of the archival material was taken over. In Slovakia, the only office of Investičná banka that remained in operation was in Bratislava. 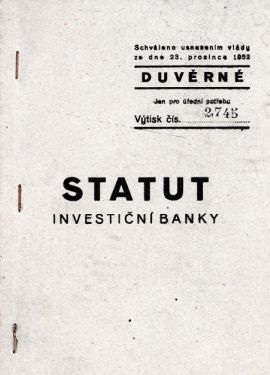 In the following period, the activities of Investičná banka were limited to completing the liquidation of the transactions and receivables of its predecessor financial institutions. The mortgage loans of these institutions were transferred in 1957 to Ústredný likvidátor peňažných ústavov a podnikov (Central liquidator of financial institutions and enterprises), whose legal successor was Správa pre veci majetkové a devízové (Administration of property and foreign exchange affairs) from 1964.

The bank’s office in Bratislava ceased its operation in 1969 and, based on an agreement of 1 April 1969, its archives were taken over by the SBCS’s Regional Institute for Slovakia. This happened on 31 October 1969. As archival services of Štátna banka československá v Bratislave were provided by its Bratislava city branch, it undertook to perform administration and keeping of the archives of Investičná banka and its legal predecessors.

The first significant disposal of documents in the fonds of Investičná banka and its legal predecessors took place in 1953. At that time, the documents were placed in the buildings at 11 Gorkého Street and 12 Leningradská Street (today Laurinská Street). In the past, these buildings belonged to Zemská banka and later to Slovenská hypotečná a komunálna banka. After the reorganisation of the banking sector in 1948, the buildings were taken over by the new Investičná banka. In 1960 they were transferred to the SBCS. In 1969, the documents were placed in the SBCS’s Regional Institute for Slovakia at 1 Nedbalova Street, in an underground safe of the securities unit. After the IB’s corporate archives were taken over by the Bratislava city branch of Štátna banka československá, the documents were moved to the former monastery in Marianka. In 1975 – 1977 they were moved to a new utility building of the archives at 27 Krajná Street in Bratislava. In 2002, archival documents from the branches of Investičná banka in the former Central and Eastern Slovakia regions were moved to the Archives of Národná banka Slovenska, which had their premises at Krajná Street. Archival documents from the former Central Slovakia region were kept in the SBCS’s regional archive, Banská Bystrica, in Turčianske Teplice. Documents from East Slovakia were kept in the SBCS’s regional archive in Košice. The first partial inventories were prepared in the SBCS’s regional archives in Banská Bystrica and Košice in 1958. In 2003, the documents were moved from Krajná Street to the premises of Národná banka Slovenska at 8 Cukrová Street in Bratislava where the partial inventories were revised in 2016.

The Archives of Národná banka Slovenska maintain mainly the files of Investičná banka’s Regional Institute for Slovakia in Bratislava and its regional branch in Bratislava. Only a small part of the paperwork of the regional branches in Banská Bystrica, Bratislava, Košice, Prešov and Žilina, and of the district branches and agents was preserved.