The founding general meeting of the regional and Catholic Ľudová banka (People’s Bank), joint stock company in Ružomberok, was held on 12 May 1907. Its share capital amounted to 66,000 Austro-Hungarian crowns (K). The bank started its operation one month later and was headed by Fedor Houdek. Until 1918, Vavro Šrobár was the chairman of the supervisory body. The biggest shareholders of the bank were Spišská Kapitula, Andrej Hlinka, the Krčméry and Labay families, a number of craftsmen and Catholic priests, and later also Mikuláš Pružinský, who served as Minister of Finance from 1939 to 1945. The launch of the bank was a success, with a turnover of K 2.4 million at the end of 1907 and a profit of K 4,262. On 20 March 1910, the general meeting decided to increase its equity capital to K 200,000 and the then administrator Fedor Houdek resigned from his office so that Andrej Hlinka could become the bank’s administrator after returning from prison.

One of the bank’s objectives was to expand to the east of Slovakia. The bank founded its first branch in Spišská Stará Ves in 1910, while the chairman of the supervisory committee became Ladislav Moyš. Moyš was a Catholic pastor in Haligovce, later governor of Uzhgorod and the first director of Slovak Radio. A branch in Poprad opened a year later, followed by branch in Spišská Nová Ves after the First World War and branch in Spišské Podhradie on 15 September 1920. 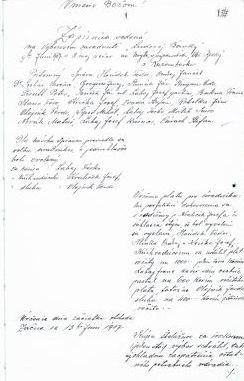 Soon afterwards, however, Ľudová banka found itself in crisis and on 25 January 1923 the Ministry of Finance announced a special regime for payment of its debts and appointed a supervisory commissioner. Between 1922 and 1925, the financial institution reported losses. In 1924, the Ministry of Finance allowed its recovery on condition that it became an affiliate of Národná banka in Banská Bystrica. Národná banka completed the recovery in 1927, when the affiliation was also abolished. The Banking Act of 1932 stipulated that members of parliament could not sit on bank boards and accordingly Andrej Hlinka resigned as chairman of the administrative board in April 1933.

After the establishment of the Slovak Republic in 1939, Ľudová banka in Ružomberok expanded its scope of operation when it became one of the central points of Slovak banking sector. In 1940, it took over several smaller regional banks, for example Ľudová banka in Námestovo, Ľudová banka in Jablonka, Banka Orava in Dolný Kubín, Obchodná banka in Prešov, thus expanding the number of its branches to ten, whereas its capital gradually increased to 16 million Slovak crowns by 1943.

On 27 April 1945, a temporary administration headed by Vladimir Lajda was charged with management of the bank. Ľudová banka in Ružomberok operated until 1948 when, with effect from 1 January, it merged by universal succession without liquidation with Slovenská banka in Bratislava.

The archival material of Ľudová banka in Ružomberok and its branches in Dolný Kubín, Jablonka and Námestovo was deposited in the archives of Štátna banka československá in Ružomberok, from where it was moved between 1992 and 1993 to the Archives of Národná banka Slovenska. A registry list of the fonds was prepared in 1968.

The most important preserved documents are the articles of association, minutes of general meetings and management meetings, correspondence with Národná banka of Banská Bystrica concerning the issue of affiliation, and documents about mergers of individual financial institutions. The fonds can be used to research the history of banking in Slovakia related to the economic and political activities of the Catholic wing of the Slovak political scene in the first half of the 20th century. The whole archival fonds was consolidated and revised in the Archives of Národná banka Slovenska in 2016.