The founding meeting of the financial institution called Myjavská banka (Myjava Bank), joint stock company in Myjava, took place on 6 December 1892. The idea came from Samuel Jurenka, a merchant, and Ján Krno, who was a lawyer. The general meeting was attended by the citizens of Myjava: Matej Jurenka, a church curator, Ján Borsuk, a townsman, Samuel Jurenka, a merchant, Pavel Gálik, a cashier, Michal Bednár, a townsman, Ján Tomiš, a tradesman, Pavel Bednár, a townsman, Samuel Slávik, an innkeeper, Ján Dinga, a bag-maker, Pavel Dudík, a bag-maker, Pavel Gálik jr. and Ján Krno, a lawyer. The meeting set the share capital at the amount of 60 thousand guldens divided into 600 shares at 100 guldens each. The offer of shares for subscription was successful and the founding general meeting chaired by Štefan Fajnor, a lawyer from Senica, took place on 23 March 1893. The shareholders were to pay a half of the share capital and get temporary vouchers for the shares bought, and the following general meeting was to decide the time limit for payment of the remaining 50% of the share capital. 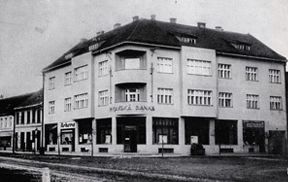 The general meeting also approved the bank’s statutes, which were drawn up by Ján Krno. Based on them, the shareholders elected the following management and supervisory bodies of the bank: Samuel Jurenka - administrator, Matej Jurenka - deputy administrator, Ján Krno - lawyer of the bank, a committee of 18 members - Karol Viest, a professor, Ján Klempa, a lawyer, Ján Borsuk, a townsman, Samuel Slávik, an innkeeper, Pavel Gálik, a bag-maker, Ján Dinga, a bag-maker, Štefan Kočvar, a townsman, Ján Bradáč, a builder, Ján Durec, a farmer, Daniel Klč, Ján Duga, Samuel Smetana, a tanner, Ľudevít Boor, a Lutheran priest, Ľudovít Semian, a Lutheran priest, Felix Štefanec, a Roman Catholic priest, Rudolf Lang, a Roman Catholic priest, Samuel Gavora, a tradesman, Štefan Štefanik, a miller, Ján Leško, an elder in the Lutheran church, Cyril Kresák, the head of Tatra banka in Senica, and Ľudovít Čulika were elected as members of the supervisory body.

Myjavská banka started operating at the end of June 1893. Its activities included the mediating of necessary financial transactions, providing of promissory note loans, mortgage loans and advances, accepting deposits and performing other banking transactions in Myjava and the surrounding region. In 1903 the bank increased the share capital to achieve the pre-set amount of 60 thousand guldens, converted to 120 thousand Austro-Hungarian crowns (K), divided into 600 shares at a nominal value of K 200 each.

In the years 1902 – 1912, new financial institutions were established in the territory of present-day Slovakia. Myjavská banka participated in their issues of shares. It had invested a total of K 333,000 in them by 1913. It also provided them with re-discounted loans amounting to K 403,000 and was involved in establishing industrial enterprises. It paid out dividends of 8 to 10%. The bank’s management gradually diverged from the original project of local business and started providing large loans amounting to K 180 to K 350 thousand. This led to attacks on the bank’s management from the press and to disagreements between the shareholders, so that some of them left and established a new financial institution – Nová banka (New Bank) in Myjava. The large loans provided and outflow of loans resulting from the disagreements in the management of the bank caused financial difficulties which the financial institution surmounted only thanks to a line of credit amounting to K 1.345 million, provided by 14 different banks, from which Myjavská banka drew in total K 846,000. This helped to consolidate the bank’s situation.

In the years of the First World War (1914 – 1918) the bank stagnated, however, it cleared its debts with its creditor financial institutions. It also participated in the share issues of Trnavská a vidiecka ľudová banka in Trnava, Úverná banka in Ružomberok, Zvolenská ľudová banka in Zvolen, and Ústredná banka in Budapest, so that by the end of 1918 its participation in other financial institutions amounted to K 1.208 million. It also invested K 470,000 in the war loans.

After the end of the First World War and the establishment of the first Czechoslovak Republic, the bank had a lot of war loans; K 700,000 in cash remained immobilised in Budapest as well as real estate worth in total K 600,000 all over Hungary. In late 1919 and early 1920, there was a significant inflow of deposits from American Slovaks, which amounted to 32,334,000 Czechoslovak crowns (Kč). This huge cash surplus helped the bank to cope with the difficult situation.

During the first Czechoslovak Republic, it provided discount loans and loans for agricultural buildings and houses. Dividends paid out in the years 1918 – 1938 amounted to 9 to 15%.

After the Second World War, the bank operated until 1 January 1948, when it merged with Slovenská banka v Bratislave, which was later integrated into Slovenská Tatra banka.

The archival material of Myjavská banka was moved to the corporate archive of Štátna banka československá in Marianka in 1956. The documents are written in Slovak and Hungarian. They may be used to study the economic and banking history of Slovakia before 1948. The archival fonds includes books of minutes of the bank’s administrative board, committee, and supervisory body, its annual reports, review reports, documents on shareholders and accounting books.

In 1965, the fonds was processed and an inventory prepared in the archives of Štátna banka československá, Regional Branch in Bratislava. The inventory was checked and amended in 2015 in the Archives of Národná banka Slovenska at 8 Cukrová Street, where it has been stored since 2003.