Stredoslovenská banka (Bank of Central Slovakia), joint stock company in Banská Bystrica, was the legal successor of Národná banka, joint stock company in Banská Bystrica, which got into great existential difficulties after the establishment of the Slovak Republic in March 1939. On 6 December 1939 the Ministry of Finance ordered Stredoslovenská banka to merge within the bank concentration process with Ľudová banka in Ružomberok, a demand that was refused by Viliam Pauliny, the chairman of the administrative board and General Director of the bank. He asked for medical leave lasting until the end of 1940 and then for retirement from 1 January 1941. Milan Kulišek replaced him as General Director in 1941 and in the same year, Miloš Vančo became the chairman of the board of directors. Thanks to personnel changes in the bank’s management and personal interventions of the Minister of Finance, Mikuláš Pružinský, and the Governor of Slovenská národná banka, Imrich Karvaš, the bank managed to maintain its independence. On 12 April 1940, the Ministry of Finance cancelled its previous decision and ordered Národná banka to take over Obchodná banka in Banská Bystrica and to omit the word “národná” in its name, as it was reserved for the central bank of the state – Slovenská národná banka in Bratislava. 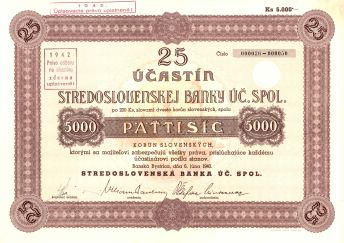 Stredoslovenská banka took over from Národná banka branches in Brezno, Detva, Dobrá Niva, Kremnica, Krupina, Martin, Pliešovce, Pukanec, Slovenská Ľupča, Zvolen, Žiar nad Hronom and sub-branch in Necpaly. In 1942, the branch in Pliešovce was dissolved and its premises were transferred to the branch in Zvolen. The bank mainly provided loans secured by promissory notes and mortgages and was also engaged in financing business activities. It owned a steam mill in Krupina with an annual capacity of 1000 wagons of grain, which, however, burned down on 21 March 1943.  The mill was rebuilt and equipped with modern machinery, making it one of the leading enterprises of its kind in Slovakia. The bank was the sole owner of the spa in Kováčová from 1926 and it also had shares in the fruit company Fatra in Banská Bystrica. The wartime boom was reflected in the bank’s transactions: deposits in savings books increased from 119 million Slovak crowns (Ks) in 1940 to Ks 298 million in 1945. In 1943, the bank achieved its highest profit of Ks 1.603 million and paid regular dividends of 4% between 1940 and 1945. As a result of the merger with Obchodná banka in Banská Bystrica in 1940, the share capital increased from Ks 10.8 million to Ks 11.604 million and finally, on 2 December 1942, the bank’s general meeting proposed an increase in share capital to Ks 16 million.

Archival documents were preserved from the operation of Stredoslovenská banka in the period of 1903 – 1955. Some of the most important documents are the minutes of the bank’s supervisory body, commercial, temporary and national administration and documents concerning the concentration of banks in Slovakia. Other preserved documents include documents from the branches in Brezno, Kremnica, Martin, Pukanec, Žiar nad Hronom and Zvolen and review reports from the branch in Slovenská Ľupča.