Rimavskosobotská banka (Rimavská Sobota Bank) in Rimavská Sobota was established in 1861 under the name Rimavskosobotská sporiteľňa (Rimaszombati takarékpénztár, r.t.) (Savings Bank of Rimavská Sobota), joint stock company, with a share capital of 60,000 guldens. The financial institution’s administration was chaired by Ferencz Miklovics and Samuel Lengyel was its director. In the years 1902 – 1916, the Bank founded a canned food factory in Rimavská Sobota (Rimaszombati konzervgyár), a local power station, Sečianska sporiteľňa in Rimavská Seč, and its branches in Klenovec and Vyšný Balog. It gradually increased its share capital to 120,000 guldens in 1884, that was converted to 240,000 Austro-Hungarian crowns (K) after the changeover to the gold crown currency in 1900. In 1918, the share capital was eventually increased to K 1.2 million. 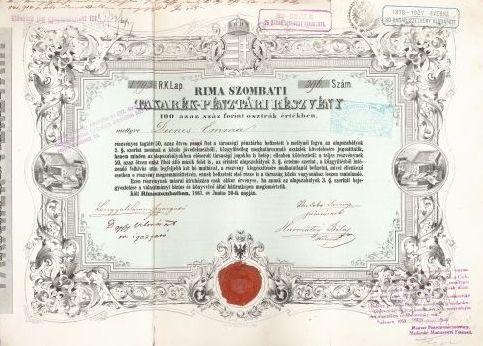 The disintegration of Austria-Hungary and establishment of the first Czechoslovak Republic had adverse effects on Rimavskosobotská sporiteľňa, as its resources were left immobilised in Budapest. The Bank had invested a large proportion of its funds into war loans, which it managed to have recognised as claims against the Czechoslovak Republic with help from Jednota peňažných ústavov na Slovensku a Podkarpatskej Rusi (Association of Financial Institutions in Slovakia and Sub-Carpathian Ruthenia) in Bratislava.

Based on Act No 302/1920 on savings banks, it had to change its name to Rimavskosobotská sporivá banka and in 1924 the name was modified to Rimavskosobotská banka. However, the Bank needed quite a long time to cope with its post-war losses, therefore it had to ask for a moratorium in 1922 and in 1924, it reached a settlement of 65% with its creditors. It had to reduce its share capital from 1.2 million Czechoslovak crowns (Kč) to Kč 480,000 in order to cover balance sheet losses. It became an affiliated institution of Bratislavská prvá sporivá banka.

As a result of the First Vienna Arbitration, Rimavská Sobota was annexed to Hungary in 1938. At this time, Rimavskosobotská banka returned to its original name Rimavskosobotská sporiteľňa. Its assets and liabilities were converted into pengő at an exchange rate of 7:1 in 1939 and consequently its share capital improved and in 1939 it was increased to 180,000 pengő. The Bank became an affiliated institution of Spojená hornouhorská banka and Košická sporiteľňa in Košice.

After the Second World War, on 2 May 1945, the Executive Authority for Finance placed the bank in temporary administration headed by Ján Kriška. On 21 December 1945, it was replaced by national administration headed by Ján Lačný, director of the branch of Tatra banka in Rimavská Sobota. On 12 July 1946, the Executive Authority for Finance ordered liquidation of the bank and appointed František Kulvánek, at that time director of the branch of Tatra banka in Rimavská Sobota, as its liquidator. The liquidator was withdrawn in 1947 and the liquidation was conferred on Ústredná likvidačná kancelária (Central Liquidation Office) in Bratislava. Slovenská Tatra banka in Bratislava took over the liquidation of Rimavskosobotská sporiteľňa in 1949. The ordered liquidation was not completed and, based on Section 18 of Act No 181/1948, the Ministry of Finance ordered in 1950 by Decree No 265/1950 the merger of Rimavskosobotská sporiteľňa by universal succession without liquidation with Slovenská všeobecná úverná banka from 1 January 1949. Its deletion from the Companies Register was ordered as at that date as well.

The preserved documents concerning the activities of Rimavskosobotská sporiteľňa in the years 1861 – 1951 are written mainly in Hungarian. The documents can be used for studying the banking history of southern Slovakia through the activities of a medium-sized Hungarian financial institution. The archival documents were deposited in the archives of Štátna banka československá in Ružomberok until 1992, where a basic registry list was prepared in 1968. In 1993 they were moved to the Archives of Národná banka Slovenska located at 27 Krajná Street in Bratislava and in 2003 to its premises at 8 Cukrová Street, where the finding aid was revised.