Established by a founding general meeting on 10 October 1841 under the name Pressburger Sparkassa, Bratislavská sporiteľňa (Savings Bank of Bratislava) was the first independent financial institution in the territory of Slovakia. It was established as a joint stock banking company with a share capital of 40,000 guldens. The idea was put forward by Pavol Ballus, a town councillor from Bratislava, who had previously published a detailed scheme for founding a financial institution entitled Projekt einer Sparkassa in Pressburg in the Pressburger Zeitung on 16 August 1839. The concept drew inspiration from two sources – the statute of Viedenská prvá rakúska sporiteľňa and, predominantly, the information on the activities of London-based commercial banks that Ballus received from Anton Jurenák, a Bratislava-born trader in London.

After meeting all essential legal requirements and resolving the material, technical and personnel questions, the bank began its operation on 2 January 1842 by opening its treasury. One year later, the bank adopted its first articles of association defining the bank’s functions, organisational scheme and the powers of its administrative bodies. The administrative agenda was carried out by a 24-member committee, while the daily operation of the institute was supervised by one of the committee members, who acted as the guarantor and controller. The highest statutory representative of the bank was the chairman, who was elected by the general meeting for a 3-year term. Until 1875, this position was held by the former chairman of the Bratislava promissory note court – count František Zichy Jr. Initially, the management worked pro bono, but after 1870 they started to receive bonuses, which as of 1883 represented 10% of the bank’s net profits. The early years of Bratislavská sporiteľňa were characterised by a cautious, even restrained, business strategy and a limited territorial presence, reflecting the wish of the founders to avoid large transactions. Their main idea was to promote the practice of saving, to relieve Bratislava’s businesses and industry of usury and to grant cheap loans that would foster their development. Against this backdrop, the bank’s business focused mainly on mortgage loans, Lombard and pawnshop banking, and on the discounting of promissory notes, although the most effort went into collecting cash deposits to support the lending activities. Due to the dynamic development of trade, industry and crafts in the following years, as well as due to rising competition, the management had to react to the changing market needs by gradually extending the bank’s services and opening new trading areas. To some extent, this was also caused by the ever-growing surplus of own funds, creating room for larger-scale investment and allowing the bank to participate in the funding of the needs of the city and its surrounding region. 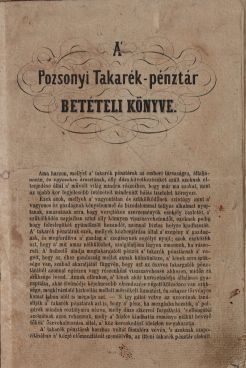 In 1921, the management of the bank responded to the provisions of the so-called Savings Banks Act by changing the bank’s name to Bratislavská prvá sporivá banka, formally acknowledging its status as a commercial bank. At the same time, the share capital of the bank was increased to 5 million Czechoslovak crowns (Kč), strengthening its influence and position in the financial market and making it an important factor in the support of smaller financial institutions with Hungarian management. The growing capital potential ensured that the bank had sufficient resources to meet the demand from its clients for loans and became a solid base for the bank’s active participation in solving the various social, communal and cultural needs of the city. Depending on its current situation, the bank had been spending money for these purposes since 1856. Among other projects, the bank played an important role in the construction of the railway between Bratislava and Trnava and it also commissioned the construction of the Ganymede Fountain in front of Bratislava’s City Theatre.

Despite being originally established as a mixed Hungarian-German financial institution, over time the bank evolved into an institution that advocated mainly the interests of traders and entrepreneurs of Hungarian nationality. Given this context, in 1941 the bank was recognized, in accordance with an international agreement between Slovakia and Hungary, as the representational financial institution of the Hungarian minority in Slovakia. In the same year, the bank became significantly interconnected with Magyar általános hitelbank, the leading Hungarian financial institution, resulting in an increase of its share capital to 15 million Slovak crowns (Ks). This close connection allowed the bank to become an active participant in transactions related to the exchange of goods between both countries, including clearing settlements.

The last chapter of the bank’s history started in April 1945 when the Trophy Committee of the Red Army’s Second Ukrainian front declared the bank, given its Hungarian nature, its spoil of war. On 5 April, the bank was assigned spoil commissioners who took over balance items worth more than Ks 127 million. With this, the bank also lost part of its cash, securities, promissory notes, claims, office machines, the content of its safe-deposit boxes and most of its equipment. The committee considered the bank liquidated and its assets the property of the Red Army. Thanks to the interventions of Slovenská národná banka and the Executive Authority for Finance, the bank was placed in temporary administration, later to be replaced by national administration, which took over the powers of the institution’s former elected statutory bodies. It was not until the second half of 1946, however, that the bank was exempted from the trophy authority of the Red Army based on an agreement between the heads of the interested governments.

At that time, the bank was already being liquidated in line with the notice of the Executive Authority for Finance of 12 July 1946. The liquidation was being carried out by the appointed liquidators and, as of October 1947, by the general liquidation administration. After several organisational changes, the liquidation process at the bank was eventually taken over by Slovenská Tatra banka, Bratislava. The last ruling concerning the fate of the financial institution with more than 150 years of history was made by the Ministry of Finance in Prague, which through its Decree No 265/50 OJ ordered the bank to merge with Slovenská všeobecná úverná banka with effect from 1 January 1949. Subsequently, the bank, including its branches in Bratislava, Nitra and Malacky, was deleted from the Companies Register.

The activities of the bank are documented mainly in the minutes of its administrative and advisory bodies, annual reports and final accounts, copies of entries in the Companies Register, and notices of the Executive Authority for Finance concerning the liquidation of the bank. The oldest documents are in German and Hungarian, with texts written in Slovak starting to appear after the year 1919. The first inventory was created at the corporate archives of Štátna banka československá in 1962 and in 2016 it was revised by the Archives of Národná banka Slovenska.