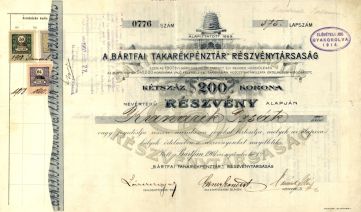 The company was authorised to perform any banking transactions permitted by law, such as taking deposits, providing loans, selling and buying real estate, recovering various claims and receiving deposits.

According to records of Compass money and business yearbooks, in 1907 - 1908 the bank’s net profit was K 42,000. It reported deposits on savings books worth K 2.2 million and provided loans in the amount of K 2 million. The overall turnover was K 15 million.

The members of the administrative and supervisory board included Ernest Exner, Július Locherer, Július Bartsch, Ármin Blumenfeld and others. The authorised representative was Karol Scholze, the main accountant Jakub Szóbel and the treasurer Richard Lugner.

The bank’s written material was stored in the archives of Štátna banka československá (ŠBČS) in Humenné until 1962, when it was transferred to the regional archives by order of ŠBČS’s Košice branch. In 1995 they were moved to the Archives of Národná banka Slovenska in Bratislava to the premises located at 27 Krajná Street and from there, in 2003, to its Archives at 8 Cukrová Street.

The preserved archival material consisted of two boxes of files and 24 books, mainly accounts books. The inventory of the fonds was compiled in 1963 and revised in 2015.