Americko-slovenská banka (American-Slovak Bank) in Bratislava was established on the basis of a resolution of the general meeting on 31 August 1920. It was formed from Roľnícka a priemyselná banka, which was established on 11 March 1909 in Veľké Leváre. Later, it merged with Meštianska banka in Veľké Topoľčany in 1917 and with Obchodná banka in Uhorská Skalica in 1919. The idea to set up the bank was the initiative of American Slovaks led by Michal Bosák. They subscribed for almost the entire share capital of 25 million Czechoslovak crowns (Kč). The equity capital was divided into 125,000 shares with a nominal value of Kč 200, of which shares of Kč 15 million were taken over by the Bosak State Bank Scranton Pa for its own account. (The shares were meant for sale in America). By the closing date for subscription at the end of 1920, own funds in the core and reserve capital exceeded Kč 37 million. 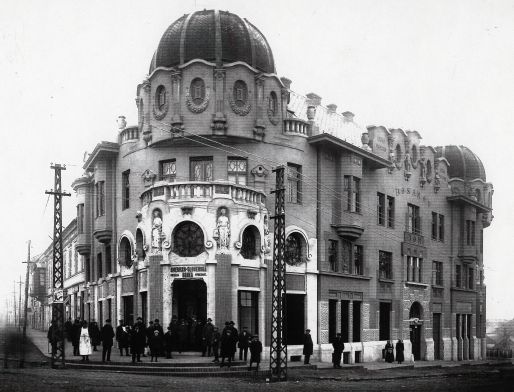 The first general meeting was held on 30 April 1921. Americko-slovenská banka started to cooperate with American banks and banking companies and arranged transactions between the USA and Czechoslovakia. The share capital of the bank in 1920 was only Kč 3 million. In 1920, a 10% dividend was paid out (only 4% in subsequent years). Michal Bosák, director of Bosak State Bank in the USA, Vavro Šrobár and Milan Hodža, members of the National Council, and Ľudovít Okánik, roman catholic dean, were elected to the administrative board. The supervisory board consisted of the following members: Igor Pietor, administrator of Meštianska banka in Trenčín, Jaroslav Skorkovský, director of Pražská úverná banka in Bratislava, and Ján Kukliš, administrator of Ľudová banka in Trnava. According to the articles of associations, the bank’s aim was to carry out banking transactions to support commerce, industry, skilled trades and agriculture, taking into account the needs of Slovakia and the American Slovaks. During its existence, the bank established 12 branches.

Member of the administrative board, Milan Hodža, was the initiator of an idea to strengthen the position of nationally oriented banks. At his initiative, on 30 October 1921, representatives of Americko-slovenská banka, Tatra banka and Slovenská roľnícka banka in Košice met to agree on a preliminary merger of their banks by the end of 1921. The negotiations broke down when the general meeting of Americko-slovenská banka’s shareholders decided to shelve the plan at the request of Michal Bosák, who was at first a member of the board of directors in the bank, then in 1923 its chairman, between 1924 and 1925 a member of the administrative board again, and finally left the bank in 1926. He gradually sold the shares he owned in Americko-slovenská banka. Between 1922 and 1923, as a result of an economic crisis, the bank suffered significant losses and, after a deflationary increase in the crown exchange rate, it lost the capital of American Slovaks. In 1928, the majority of its shares were taken over by Banka československých légií, and a year later it was affiliated to this institution. Americko-slovenská banka operated until 1932, when it was decided at an extraordinary general meeting that the bank would merge with Slovenská všeobecná úverná banka.

Archival documents from the branch offices in Nitra and Topoľčany were archived in the archives of Štátna banka československá in Nitra. In 1962 they were transferred to its archives in Marianka, in years 1974 to 1976 to its archives at 27 Krajná Street in Bratislava and later, in 2003, to the Archives of Národná banka Slovenska at 8 Cukrová Street in Bratislava, where they were sorted. Archival documents of the headquarters of Americko-slovenská banka were moved in 1956 to the corporate archives of Štátna banka československá in Marianka, where later, in 1964, an inventory was made of them. In 2015, the inventory was checked and amended in the Archives of Národná banka Slovenska. The archival documents in the fonds are written in the Slovak language. 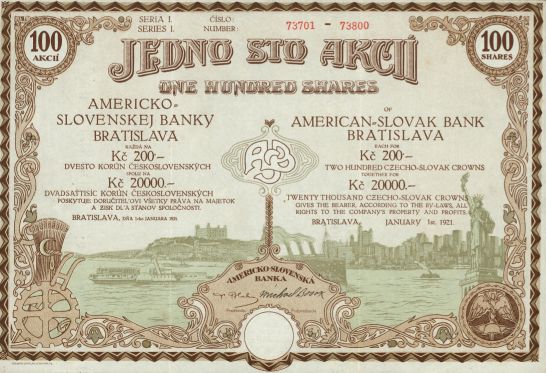 Despite the small number of preserved and processed documents, the archive fonds can be used to study the history of the economy and banking in Slovakia after 1918, especially the capital involvement of American Slovaks and competitive struggles between Slovak and Czech financial institutions in the interwar period.