In 1846, the Daxner family in Tisovec founded Hospodársky spolok (Economic Society), whose first chairman was Štefan Marko Daxner. Apart from saving options, it provided loans secured by promissory notes at low interest rates to the citizens of Tisovec and the surrounding area. Between 1848 – 1849 the Society provided loans amounting to 4 thousand guldens.

It built the foundation on which Tisovská vzájomná pomocnica (Tisovec Mutual Help) was established in 1871, which was transformed into a self-help cooperative. At first, it did not accept deposits but provided loans to its members from subscribed shares, thereby fighting against the usury which impoverished the population. 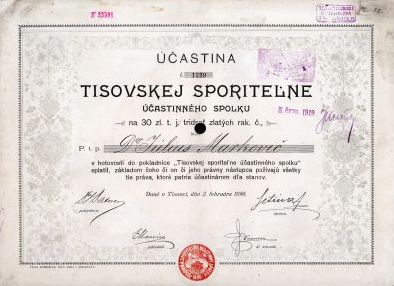 In 1895, the cooperative reported a net profit amounting to 6,500 guldens and the board of directors decided to pay out dividends of 6%. On 2 February 1896, the general meeting voted to transform the cooperative into a joint-stock company (účastinný spolok) named Tisovská sporiteľňa (Savings Bank of Tisovec), účastinný spolok, thus increasing the number of Slovak banks established in the 1890s from seven to eight. The financial institution began its operation under the new name on 1 January 1897.

Credit for its functioning was attributed to Samo Daxner who became the first county head of Gemer-Malohont County in 1919 – 1922, and to Július Markovič, a doctor, on whose initiative Ľudová banka in Nové Mesto nad Váhom was founded. Samo Daxner owned the most shares (144 pieces).

The clientele consisted mainly of farmers and small merchants. Apart from providing loans, the financial institution also directly financially contributed to charity in Tisovec. All administrative acts were performed in the Slovak language and Tisovská sporiteľňa mainly supported establishing purely Slovak banking institutions and enterprises. The bank invested its financial surpluses in the purchase of securities and in the first year of its operation it owned 100 shares of Tatra banka worth 5,100 guldens and 10 shares of Turčiansky pivovar (brewery) worth 2,010 guldens.

Its name was changed in 1921 to Pomocnica, účastinná spoločnosť (joint stock company) in Tisovec. The Ministry of Finance by its order issued on 13 December 1939 ordered the bank to merge with Ľudová banka in Ružomberok. However, the bank finally merged with Roľnícka vzájomná pokladnica, družstvo s r. o., which moved to Tisovec in 1938 from Rimavská Sobota, as that territory had fallen to Hungary after the First Vienna Arbitration. The financial institution in Tisovec played an important role in the Gemer-Malohont region, in particular with its national focus as well as provision of financial assistance to impoverished citizens. After the merger, its activity was wound up in 1940.

The archival documents of its operation were initially stored in the archives of Štátna banka československá in Ružomberok, where they were arranged, and a temporary inventory was compiled. After 1992 they were moved to the Archive of Národná banka Slovenska in Bratislava, at first to the premises located at 27 Krajná Street and later, in 2003, to the Archives building at 8 Cukrová Street. In 2016, the temporary inventory was revised. The archival fonds consists mainly of minutes of the bank’s administration, annual reports and a few deposit and loan books.