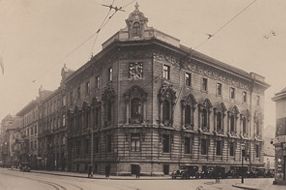 The first central bank to influence monetary developments in our territory was the Austrian National Bank, established on 1 April 1816. It was the first bank in the Habsburg Monarchy to be granted a monopoly right to issue banknotes throughout the realm, to oversee the circulation of banknotes and to establish branches. In 1878, its successor became the Austro-Hungarian Bank, which expanded its operation in the territory of Slovakia by opening five branches (at Košice, Bratislava, Banská Bystrica, Nitra, and Žilina) and 14 sub-branches.

Ministerial administration ended on 1 April 1926, when a new legal entity, Národná banka Československá (NBCS; National Bank of Czechoslovakia) was established as the central bank for the whole territory of the republic. NBCS was tasked with regulating the Czechoslovak currency and ensuring that it was backed by precious metal and could be converted into foreign currency. The bank took over all the banking authority’s offices and increased their number. By 1937 NBCS’s representation in Czechoslovakia comprised, in addition to its Main Institute in Prague, 34 branches and 136 sub-branches, of which 6 branches and 22 sub-branches were in Slovakia (the Slovak branches were at Bratislava, Košice, Banská Bystrica, Žilina, Nitra and, from 1933, Ružomberok). Slovakia was represented on the Banking Committee by Ľudovít Medvecký (1926 – 1930) and Matej Metod Bella (1930 – 1938). After the declaration of Slovak autonomy in October 1938, the central bank's name was changed to Národná banka Česko-Slovenská (NBC-S; National Bank of Czecho-Slovakia). In December 1938, the head of the Bratislava branch, Martin Kollár, was appointed a member of the Business Administration; in January 1939, Fraňo Tiso was elected to the Banking Committee and Jozef Rybár was elected to the Audit Committee. At the end of February 1939, Jozef Fundárek was appointed deputy-governor of NBC-S. The first phase of the bank’s existence came to an end on 6 April 1939, with the founding of the independent Slovak State and the Protectorate of Bohemia and Moravia. 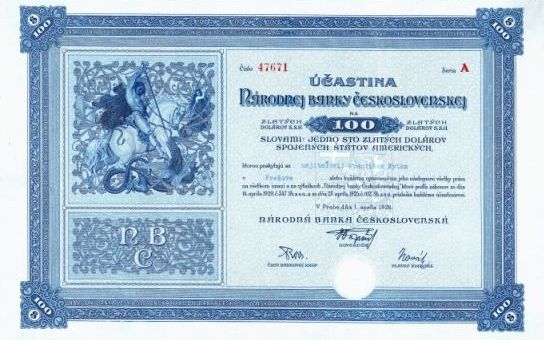 Národná banka Československá was eventually restored in 1945. In the same year, the bank established a Regional Institute for the territory of Slovakia, headquartered in Bratislava, which had an autonomous status within the bank’s structure and could make independent decisions on all banking operations concerning Slovakia. It was led by Ján Michalík and Karol Markovič. Slovakia was represented in NBCS’s central bodies in Prague by Ján Oliva and Matej Murtin. Jozef Púčik was appointed the bank’s deputy-governor in 1948. NBCS operated until 1950, when it was replaced by the Štátna banka československá, headquarters for the Slovak Republic, Bratislava (SBCS; State Bank of Czechoslovakia).

Preserved documents and records document the activities of the three successive central monetary institutions that operated in the territory of Slovakia. However, they are incomplete, except for the Regional Institute of NBCS. The Austro-Hungarian Bank’s branch in Bratislava operated for forty years (1879 – 1919) but only a very limited amount of documentary records of its activities have been preserved. Most of the documents preserved are files from the NBCS Regional Institute (1945 – 1950). The documents include several valuable records that make an important contribution to our understanding of monetary developments in Slovakia in the years before 1950. Other key archival documents from the NBCS Regional Institute include records from the Credit Department concerning the provision of investment loans to stimulate the post-war economy and documents from the Foreign Exchange Department concerning negotiations with foreign partners about the settlement of claims of the former Slovenská národná banka, Bratislava.