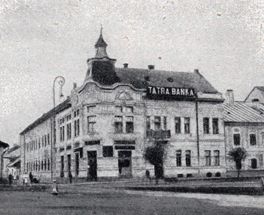 The difficult situation, however, did not stop the citizens of Brezno in their effort to establish a joint-stock financial institution. A self-help society Vzájomná pomocnica had existed in Brezno since 1868. A preparatory meeting which took place on 2 June 1873 was chaired by Matej Kamaszy and attended by Samuel Lopušný, Ján Mikszáth, Ján Polony jr., Matej Zachar, Nataniel Csipkay, Ján Csipkay, Jozef Baittrok, Ladislav Fogler, Ondrej Skrowina and many others. The temporary committee published the results of an invitation to subscribe shares of Breznianska sporiteľňa. The organizers intended to issue 600 shares, but public interest was so great that the number was exceeded by more than a half. The meeting elected Ján Mikszáth as a new temporary chairman and invited him to prepare draft articles of association in cooperation with Ján Csipkay.

The joint stock company Breznianska sporiteľňa was declared established at the general meeting on 6 July 1873. The draft articles of association were accepted in full and the chairman was delegated to submit them to the Royal Ministry of Agriculture, Industry and Commerce. Ján Mikszáth became director of the financial institution and Samo Lopušný, mayor of the free royal town of Brezno, was elected chairman of the general meeting by the shareholders. The new financial institution was entered in the Companies Register of the Regional Court in Banská Bystrica on 17 June 1876. The share capital amounted to 45,500 guldens, i.e. 910 shares at 50 guldens each.

The character of Breznianska sporiteľňa changed soon after its establishment. The financial institution created by Slovak patriots fell under the influence of Hungarian capital. From 1874, the minutes of the general meetings were taken only in Hungarian.

In 1903 the financial institution was renamed Breznianska účastinná sporiteľňa v Brezne, but in 1910 it returned to its original name. At that time, the share capital was increased to 420,000 Austro-Hungarian crowns (K) meaning 1400 shares at K 300 each. Seven years later the share capital was more than double and amounted to K 1 million. The bank provided bills of credit and mortgage loans to traders and businessmen from the region and to the municipality of Brezno.

From 1919, the minutes of meetings were also taken in Slovak again. The general meeting of 25 May 1919, which was chaired by Michal Matunák, the first chairman of Matica slovenská in Brezno, decided to promptly enter the name of Breznianska sporiteľňa in the Companies Register of the Regional Court in Banská Bystrica. The share capital amounted to K 1.5 million.

After the First World War, the bank experienced a difficult situation as its funds were frozen on accounts with banks in Budapest and in Austro-Hungarian war loans. Its management started preparations for a merger with another financial institution. Potential partners included Národná banka in Banská Bystrica, Hospodárska banka in Bratislava and Tatra banka in Martin.

The extraordinary general meeting of 8 May 1921 changed the company’s name to Breznianska banka, účastinná spoločnosť (Brezno Bank, joint stock company), as required by Act No 302/1920 Coll. of 14 April 1920 on savings banks. At that time, Ján Bruoth was manager of the bank.

On 24 September 1921, the bank’s management recommended that shareholders approve a merger with Národná banka in Banská Bystrica. The former Vzájomná pomocnica, later Pomocnica úverná banka, účastinná spoločnosť, in Brezno also became a branch of this bank on 1 January 1921.

Moreover, Tatra banka undertook to establish its branch at the premises of Breznianska banka and appoint the present chief clerk Ján Kusý as its manager. The merger was completed on 22 December 1921 when it was approved by an extraordinary general meeting of Tatra banka. Thus the forty-eight-years’ existence of Breznianska banka came to an end.

The archival documents of Breznianska sporiteľňa were initially stored in the corporate archives of Štátna banka československá in Ružomberok, where they were processed and their temporary inventory was made. In 1995, they were transferred to the Archives of Národná banka Slovenska in Bratislava. The temporary inventory dates from 1968, it was revised in 2015. The fonds consists mainly of minutes of bank management meetings, general meetings and annual reports.