Bánovská ľudová banka (Bánovce People’s Bank), joint stock company in Bánovce nad Bebravou, was established in 1904. Its share capital of 60,000 Austro-Hungarian crowns (K) was increased in 1909 to K 120,000 and in 1912 to K 250,000. It was a Slovak financial institution, whose main representatives were Jozef Minárik, Ján Minárik and Anton Lapár. Its administrative and supervisory board included several prominent personalities of Slovak political and economic life, such as Igor Hrušovský, Miloš Izák and Vladimír Jesenský. The bank's legal representative was Janko Jesenský, the local lawyer. The head officials of the bank were Ľudovít Dobrucký (1905, 1919 - 1921), Vladimír Hrušovský (1906 - 1909), Dušan Viest (1909 - 1917). In the Companies Register it was registered also in Hungarian as Báni népbank részvénytársaság and in German as Báner Volksbank Actiengesellschaft. 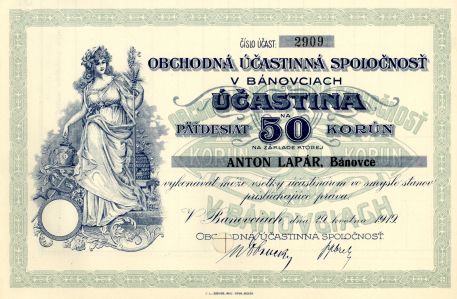 Bánovská ľudová banka began its activity in 1905 and two years later it initiated the establishment of Obchodná účastinná spoločnosť (Trading joint stock company) in Bánovce nad Bebravou, an enterprise with various goods. Its first branch was established in 1909 in Ilava and the second branch was opened in 1921 in Topoľčany. The bank’s activities included collecting deposits and providing small loans to farmers, craftsmen and traders for well secured coverage. In 1911, it reported a net profit of K 17,600, while deposits on the savings books reached the amount of K 701,000 and loans almost K 1.5 million. In order to satisfy the demand for credit, the bank often had to ask for rediscounted loans from larger Slovak banks, especially from Tatra banka in Martin. Its rediscounting debts reached K 570,000 in 1911. The Bank regularly paid dividends from its profits in the range of 3% to 6%.

After the establishment of the first Czechoslovak Republic in 1918, its gradual growth continued and in 1919 it increased its share capital to 1 million Czechoslovak crowns (Kč). In 1920, deposits in the savings books amounted to almost Kč 8 million and the bank provided loans in the volume of Kč 5 million and paid out dividends of 12%. It was also involved in the founding of industrial enterprises such as Elektrárenská účastinná spoločnosť (electricity company), Hlohovec in 1919 and Drevárske družstvo (wood cooperative), joint stock company, Bánovce nad Bebravou, in 1921.

In the consolidation of the Slovak banking sector in 1921 it ceased to act as a separate financial institution, as the general meeting and the bank’s administration meeting held on 10 November 1921 presented the possibility of a merger with Tatra banka. According to the minutes of the administrative board, the merger took place on 3 December 1921 when Bánovská ľudová banka became Tatra banka’s subsidiary. Tatra banka also acquired its branches in Ilava and Topoľčany.

The preserved archival records of the headquarters were deposited in the corporate archives of Štátna banka československá at Marianka. In 1975 - 1977 they were moved to a new utility building of the archive located at 27 Krajná Street in Bratislava and later, in 2003, they were transferred to the Archives of Národná banka Slovenska at 8 Cukrová Street. The documents of the Ilava branch were deposited in the Archives of Štátna banka československá in Ružomberok and their partial inventory was made in 1968. After 1990 they were moved to the archives at 27 Krajná Street and later, in 2003, to the archives at 8 Cukrová Street. The partial inventory of the headquarters’ documents was made in 2007. In 2016 both inventories were revised, completed and merged into one temporary inventory.