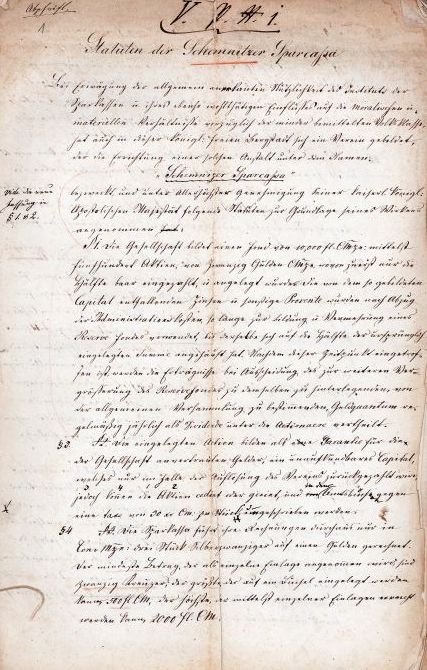 By then, the golden age of the independent royal town of Banská Štiavnica was but a distant memory. Mining in local mines was becoming unprofitable because it was based on outmoded technologies and the companies did not have sufficient capital for new technologies. Businesses were being wound up, leading to a deterioration of people’s economic situation.

At a town council meeting in February 1847, councillor Alexander Goldbrunner put forward an idea to establish a financial institution in Banská Štiavnica similar to already existing companies. At the same time, he showed the other councillors the articles of Bratislavská sporiteľňa. His proposal was accepted positively.

The articles of joint stock company were far more problematic and required many modifications before competent authorities finally approved them in 1866. The bank was established during the turbulent period leading up to the revolutions of 1848. The competent authorities were concerned that the bank’s activities would have a political character. They imposed such requirements on the bank that provoked disapproval. For example, profits should have been fully allocated to the reserve fund, which would mean that the shareholders would not receive any dividends.

The oldest preserved documents on the company’s activities – the minutes of the board’s meetings between 1847 and 1870 and a transcript of the draft articles of association of 1853 – were in German. From the 1850s onwards, the number of documents made in Hungarian increased. After 1870 Hungarian was preferred and at the turn of the century it became the only working language of the bank. Only the last three annual reports of the bank from 1919 to 1921 were also produced in Slovak.

Initially, the bank was only open to the public on Mondays and Wednesdays, between 2 and 6 p.m., and on Saturdays from 8 to 12 a.m. It operated in rooms rented from a local apothecary before it started to build its own building in 1867.

The management committee consisted of 30 members. The general meeting elected a chairman for a term of 3 years. He chose ten censors who validated the authenticity of bills of exchange. From 1875, the management and supervisory boards became the bank bodies in accordance with the new commercial law.

The bank initially took only deposits of up to 2,000 guldens, while the 1853 articles of association set the deposit rate at 5% for deposits not exceeding 1,000 guldens and 4% for deposits of 1,001 guldens and higher. The bank thus planned to apply a regressive rate supporting mainly smaller depositors, but this aim was never implemented. Deposit rates decreased over the years from 6% to 4%. The founders envisaged an interest rate of 6% for mortgage loans. There were, however, periods when it went up to 9%. Premises that served as collateral for mortgages had to be insured against fire with local insurance agencies.

From 1872, the bank administered a pension fund for its employees. During the First World War and in the post-war crisis period, the employees received extra money to compensate for high prices, as well as clothing and housing allowances.

Banskoštiavnická sporiteľňa developed successfully. During the first twenty years of its operation, the volume of deposits increased three times, net profits grew almost four-fold and the volume of provided credit was approximately 13-times higher than at the time of its establishment. After the First World War, in 1918, its share capital was 890,000 Austro-Hungarian crowns.

The bank acquired shares in various companies, e.g., Hungarian railways, Transylvanian railways, Rimomuránske želežiarne ironworks, etc. The bank also engaged in activities for the development of Banská Štiavnica and its vicinity. It initiated and funded the construction of a row-house town quarter next to the Belianska Gate between 1905 and 1907. The bank also supported the establishment of a wood processing factory Sitno, as well as a brewery and a malting plant in Vyhne. It lent 20 thousand guldens for the construction of a railway from Šahy through Nemce to Zvolen on condition that a branch would be built from Nemce to Banská Štiavnica. Before the First World War, the bank was popular as a discounting institution for Lower Hungarian banks and provided loans for the construction of tenement houses in Pest. However, it never extended its activities toward establishing subsidiaries and branches.