Zvláštny (Osobitný) fond pre zmiernenie strát z povojnových pomerov (Special Fund for the Mitigation of Losses from Post-War Conditions) was established under Act No 237/1924. It allocated resources for reconstruction to joint-stock banks, banking companies, pawnbroker’s shops of every type, credit cooperatives, savings banks, and provincial financial institutions. The allocated resources had the form of state-guaranteed 4% ‘fund bonds’ with a 40-year maturity period. The main source of payments and interest income on the bonds would be state subsidies amounting to 50 million Czechoslovak crowns (Kč) annually, and contributions paid by financial institutions. In 1925 the Special Fund concluded an agreement with Zemská banka in Prague under which the bank provided accounting, cash processing and office services to the Fund. The core resources of the Fund were the fund bonds worth Kč 1.640 million. Recovered banks were allocated Kč 700 million, liquidated banks received Kč 330 million, non-credit cooperatives received Kč 350 million, loan societies and credit cooperatives Kč 150 million, and savings banks and provincial financial institutions were allocated Kč 110 million. 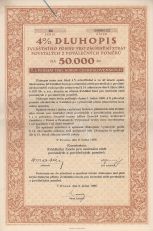 The plans for a complete reconstruction were frustrated by the economic crisis in the years 1929 – 1933. In April 1932 the Czechoslovak parliament adopted amendments to financial laws in the form of Banking Act No 54/1932, based on which a new reconstruction plan was prepared by the end of the summer. The state provided reconstruction resources in the amount of Kč 775 million in fund bonds and Kč 525 million in guarantee loans.

In 1940 Government Regulation No 242/1940 ordered obligatory registration and custody of bonds issued by Zvláštny fond pre zmiernenie strát z povojnových pomerov and Všeobecný fond peňažných ústavov (General Fund for Financial Institutions) in Slovakia, as well as obligatory reporting of liabilities to and claims on the funds. After the establishment of the wartime Slovak State in 1939, based on bilateral negotiations with Germany, the Special Fund, together with the General Fund, was first replaced by Pomocný fond peňažných ústavov (Assistance Fund for Financial Institutions) under Act No 172/1941, and then definitively dissolved by Act No 112/1947 with effect from 31 December 1945.

The documents from the years 1924 – 1950 related to the Special Fund’s activities concerning reconstruction assistance to Slovak financial institutions are currently deposited in the Archives of Národná banka Slovenska. The documents were transferred from Prague to Slovakia in the years 1939 – 1945 in connection with liquidation of the Fund’s claims and liabilities. They include mainly the Fund’s balance sheets, lists of approved financial support for Slovak financial institutions, records of negotiations between Slovakia and Germany concerning redistribution of the Special Fund’s liabilities, reports on the obligatory registration and custody of fund bonds, documents concerning provided reconstruction subsidies for individual financial institutions, and reports on contributions from recovered institutions to the Fund. An inventory for the fonds was prepared in 2015.