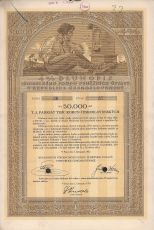 Všeobecný fond peňažných ústavov v Republike Československej (General Fund for Financial Institutions in the Czechoslovak Republic) was established based on Act No 238/1924 of 10 October 1924 with the aim of increasing savings ratios, improving deposit protection and ensuring the favourable development of the financial system. Among the members of the Fund were financial institutions accepting deposits on savings books. If any of the members suffered losses or a decrease in liquidity, which would pose a threat to their existence or the interests of depositors, the Fund would provide them with financial assistance. After the establishment of the wartime Slovak State, its functions in Slovakia were taken over by Pomocný fond peňažných ústavov (Assistance Fund of Financial Institutions) based on Act No 172/1941. It was definitively dissolved by Act No 157/1949 of 15 June 1949.

Documents of Všeobecný fond peňažných ústavov v Republike Československej from the years 1924 – 1944 are stored in the Archives of Národná banka Slovenska at 8 Cukrová Street in Bratislava. In addition to financial institutions’ requests for support from the Fund’s resources, the maintained documents include also the rules of procedure of the Fund’s Board of Trustees, instructions for agents of the Fund’s sub-group in German and Czech versions, a list of recoveries for 1940, and reports on the Fund’s management from 1925 on. The archival fonds was processed in 2008 and a checked and corrected inventory was issued in 2015.