Košická sporiteľňa (Savings Bank of Košice), joint stock company in Košice, was founded on 1 May 1844. The establishment of the first financial institution in Košice was initiated by Karol Fiedler, an ironware wholesaler, who submitted a written proposal to the town council for the establishment of a savings bank in cooperation with A. Laszner and J. Lehner on 13 May 1843.

On 22 December 1843, the town council of Košice approved the proposal submitted by the town councillors Š. Barany, J. Kloczek and the town prosecutor Ľ. Dobay. On 18 January 1844, the founding general meeting of Košická sporiteľňa decided to establish the savings bank as a joint stock company. The share capital of 30,000 guldens was divided into 300 shares each of 100 guldens’ value. 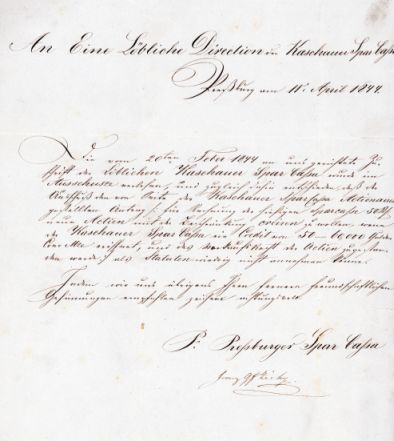 Count Jan Barkóczy was elected as the first chairman of the administrative board (the first operating rooms of the savings bank were in his house on Hlavná Street), with town lieutenant J. Kloczek as director and Karol Fiedler as deputy director. Apart from that, 24 regular and 6 substitute members of the committee were elected. The bank accepted deposits at a rate of 4% and provided loans at a 6% rate. The smallest allowed deposit was ten silver coins. On 14 March 1846, the general meeting approved the purchase of a house on the corner of Hlavná Street and today’s Alžbetina Street. At the time of the revolution in 1848, the bank suspended its operations and renewed them again on 29 May 1849. The bank’s net profit a year later amounted to more than 7,000 guldens.

For some time the bank prospered but in the second half of the 19th century, it was jeopardised by fraudulent alteration of accounting books for the purpose of large-scale embezzlement. In 1871, the chief accountant resigned and disappeared without any trace in 1872. At that time, his frauds came out, the bank went bankrupt and recovered only slowly. The share capital was increased, and a 5-member supervisory board was elected to solve problems.

At the beginning of the 20th century, the share capital had been steadily increasing so that in 1924 it already amounted to 4 million Czechoslovak crowns (Kč). The majority of the shares were owned by Česká eskomptná banka in Prague, from which it was bought by Magyar általános hitelbank in Budapest in 1939.

With regard to capital, Košická sporiteľňa was the strongest financial institution in Košice. It constantly expanded its activities and in 1939 it had branches in Lučenec, Mukachevo and Uzhgorod. In 1940, its net profit was 104,500 pengő.

Part of the preserved archive material was deposited with the liquidation group at the then 1 Stalingradská Street in Košice. In 1961 it was handed over to the archives of Štátna banka československá in Košice at 4 Vrátna Street. In the same year, an internal disposal and sorting of the fonds was carried out. From 1953, the rest of the documents were deposited in the archives of Štátna banka československá in Bratislava. From 1958, these documents were deposited in the former monastery at Marianka, which served as archives for the Regional Institute of Štátna banka československá. In 1975 – 1977 they were moved to a new utility building of the archives at 27 Krajná Street in Bratislava. After 1990, the documents from Košice were transported to the same place. In 2003, all preserved documents from Košická sporiteľňa were moved to the Archives of Národná banka Slovenska at 8 Cukrová Street in Bratislava.

The first inventory was prepared in December 1962 at the archives of Štátna banka československá for the documents deposited in Košice. For the documents deposited in Bratislava a registry list was prepared. The inventory together with the registry list was revised and combined into one temporary inventory in the Archives of Národná banka Slovenska in 2016. Among the preserved documents were the minutes of the administrative and supervisory boards, annual reports, balance sheets and fragments concerning the institution’s various activities.