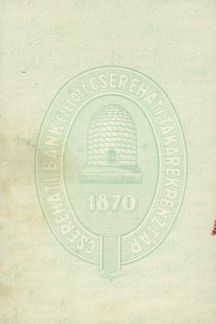 The purpose of the financial institution was to provide loans to the poorer population, take deposits and assist in the development of crafts and trade in the surrounding region. According to the records and business yearbooks, the bank’s net profit in 1935 was 130,000 Czechoslovak crowns (Kč). Deposits amounted to Kč 13.2 million and loans to around Kč 10 million.

The members of the administrative and supervisory board of the bank in the 1930s were Lörinc Bolgár, Matej Göbl, Ján Göbl, Ján Eiben, Juraj Göbl, Gašpar Ludvig and others, the main accountant Anton Payer and cashier Andrej Gedeon.

Čerehátska banka existed until 1945, when it was assigned to a liquidator and as of 1947 its liquidation was started by the Regional Liquidation Office based in Košice.