The share capital of the company was 80,000 guldens. It issued 800 shares with a nominal value of 100 guldens. The share capital of the company was increased to 200,000 Austro-Hungarian crowns (K) in 1907, to K 1 million in 1913, and to 3.51 million Czechoslovak crowns (Kč) in 1922. The company was authorised to carry out all banking transactions permitted by law: taking deposits, providing loans, buying and selling real estate, representing foreign institutions, recovering various receivables and providing safekeeping services.

Berego-Mukačevská sporiteľňa thrived. The net profit in 1907 was K 92 thousand. The deposits on the savings books were K 4 million and loans amounted to K 5.5 million. According to records of the Compass money and business yearbooks of 1913 - 1915, deposits increased to K 5 million and loans to K 6 - 7 million. In 1922, the bank established its branches in Tiachiv (Tjačiv) and Khust (Chust). 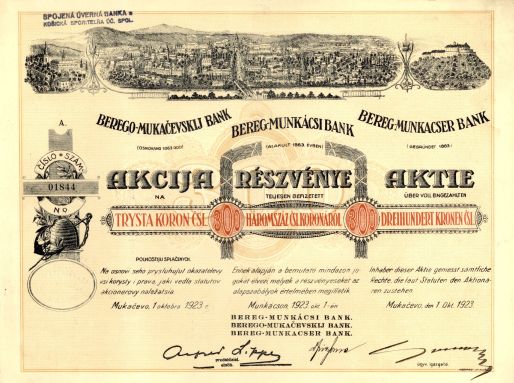 As a result of the political changes after the First World War, the bank changed its name in 1920. Berego-Mukačevská sporiteľňa was transformed into Berego-Mukačevská banka, joint stock company. In 1922, the majority of shares already belonged to Slovenská všeobecná a úverná banka.

The bank expanded year by year and reported a net profit of Kč 1.5 million in 1927. Deposits on the savings books amounted to Kč 17 million, loans totalled the same volume and salaries paid to employees accounted for Kč 250,000.

The members of the administrative and supervisory boards included Július Borzsay, Julius Ferenczy, Fried Soma, Ján Forgach and others. The directors of the bank were Július Hrehuss and Tivadar Bertalan.

Berego-Mukačevská banka continued until 1942 when it was taken over by Spojená hornouhorská úverová banka and Košická sporiteľňa, joint stock company in Košice. After Košice was returned to the Czechoslovak Republic in 1945, it operated under the changed name Spojená úverná banka a Košická sporiteľňa, joint stock company in Košice. In 1946, the bank was placed in liquidation, which continued until 1949 when it merged with Slovenská všeobecná úverná banka, Bratislava.

The documents of the bank were kept in the corporate archives of Štátna banka československá in Košice, at the then 2 Stalingradská Street, until 1960. However, only fragments were found there. The other written documents were probably  moved by the financial institution’s liquidators. In 1961, after the consent of the liquidation group, the files were transferred to the archives of Štátna banka československá in Košice and an internal disposal process was carried out there a year later. The archive fonds was transferred to the Archives of Národná banka Slovenska in Bratislava in 1995, where they were first stored in the building at 27 Krajná Street before being moved to the building at 8 Cukrová Street in 2003.

The preserved archival material from Berego-Mukačevská banka is in one box. It consists of minutes of the supervisory board, audit reports, statutes and copies of entries from the Companies Register. The first temporary inventory was prepared in 1963 and revised in 2015.